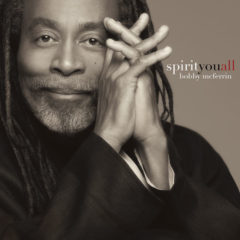 After 30 years of uplifting vocals, a cappella magic, 10 Grammys, and a wide swath of musical collaborations, in his new album Bobby McFerrin focuses on his own spiritual path. “I read the Bible every day,” writes McFerrin in the liner notes, explaining his special affinity for the Psalms. “Songs of praise, songs of prayer, songs of agony, songs of defeat. It’s all there, at the very center.”

Grounded in faith, liberation, and the teachings of Jesus, this deeply spiritual album is also a loving nod to his father, Robert McFerrin Sr., the first African American man to sing a lead role with New York’s Metropolitan Opera Company. SpiritYouAll opens with the song “Everytime,” from the senior McFerrin’s 1959 album Deep River and Other Classic Negro Spirituals. “Fix Me Jesus” and “Swing Low” also appeared on Deep River, now wonderfully rearranged for a contemporary feel.

SpiritYouAll features seven classic spirituals, five original tunes, and even a Bob Dylan cover, “I Shall Be Released.” If you listen closely to “Jesus Makes It Good” you’ll hear Bobby playing the instrument on which he began his musical career: the piano. And the sweet rendition of “He’s Got the Whole World” may become another classic for McFerrin in the tradition of his 1988 hit, “Don’t Worry, Be Happy.”

McFerrin acknowledges listeners of all faiths in his notes. “These songs are based in my Christian faith but acknowledge and reflect the spirit of YOUALL, wherever your particular faith and journeys may take you.”