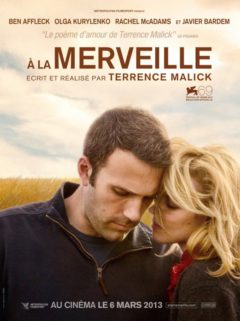 To the wonder, an ethereal drama of love and adultery set in Paris and Oklahoma, is American auteur Terrence Malick’s most transcendental film to date, eschewing traditional notions of narrative and utilizing multiple voice-overs that focus instead on states of inner being.

It starts off with loving, elliptical images of a burgeoning romance between a man (Ben Affleck) and a woman (Olga Kurylenko) in France. Then, he invites her to come live with him back home in Oklahoma. Malick and cinematographer Emmanuel Lubezki create a visual style that mimics our own capacity for wonder: Through their lens, an American supermarket looks as mysterious as a European pilgrimage site. But the Edenic happiness of their early love is complicated by their new life: Malick uses the metaphor of the man’s work, investigating environmental catastrophes, to comment on the way that their love seems to have fallen from grace. After the woman and her daughter have to return to France because of visa issues, he falls for another woman (Rachel McAdams). Meanwhile, a priest (Javier Bardem) deals with his own doubts as he tends to the needy of this town. These stories don’t exactly intersect—rather, Malick uses the priest’s spiritual crisis to ask questions about where love and deception fit into our conceptions of grace. And although the filmmaker often puts specifically Christian imagery into his film, his sensibility turns out to be more Zen: he can find manifestations of glory in both the noblest gesture and the darkest impulse.