In the River They Swim 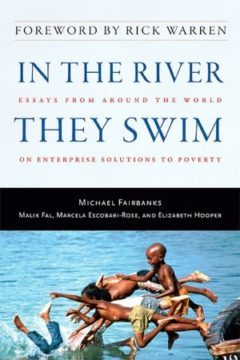 Michael Fairbanks has worked closely with the presidents and prime ministers of 20 nations and knows that they are “men and women who have more in common with the rest of us than not. They sleep badly, own pets, laugh at off-color jokes, squeeze their toothpaste mid-tube, like to learn, and worry. They worry a lot,” he says. He and the other contributors to this wide-ranging book of essays pose some of the perennial questions about the persistence of worldwide poverty and offer some solutions that are different from the usual “foreign aid habit” of throwing money at the problem from a distance, hoping things will change.

Most of the book’s contributors know that the problem of the persistence of poverty has much to do with mental attitudes: “The world’s greatest development challenges are not primarily about money, lack of good will, or even the absence of technical knowledge,” says contributor Kwang W. Kim in his essay on Brazil’s Digital Harbor. “They are mainly about ‘mental walls’ by key decision makers and opinion shapers in government, business, academia, industry associations, the media, and civic and international organizations on how they view wealth, prosperity, trust, distribution, the role of government, competitiveness, and business strategy. The results of these mental barriers are that, rather than making things better, these leaders create economic barriers with very visible effects on the poor.”

What is most interesting, given the state of the U.S. economy at the end of the first decade of the new millennium, is how many of the attitudes and “mental walls” that contribute to the persistence of poverty in third world countries can be seen doing the same right here at home.

Michael Fairbanks is a citizen of the United States, Ireland, and Rwanda; he was a U.S. Peace Corps teacher in Kenya and co-authored Plowing the Sea: Nurturing the Hidden Sources of Growth in Developing Nations, in use by Harvard Business School. He is a co-founder of SEVEN and the OTF Group.