"What if we can embrace ahimsa as total avoidance of harming anyone—not only by deeds, but also by words and thoughts? What if we start with ourselves?"

In Patanjali’s Yoga Sutra, ahimsa is considered the first of the five yamas, which are basically a yogi’s ethical and moral guidelines towards society. Ahimsa directly translates as “nonviolence”—the root word, himsa, means “violence” or “hurt” while the prefix a- means “not” or “no.”

In yoga, we believe killing another living being for any reason, including one’s own sustenance, is a violation of ahimsa. But violence comes in many forms. In some forms, you instantly comprehend it and know exactly what it is. The violence is visceral. And then others just creep up on you. Your subconscious might hurt, but you don’t fully recognize that you are hurting or being hurt until much later.

Recently a very dear friend shared her story with me, which created such an aha! moment for me. All these years, I had thought of ahimsa as a practice where you avoided hurting others with your words and actions. But I didn’t realize how limited my understanding was in some ways. I never factored in lack of self-love as violence, himsa, towards self. Her confession made it clear that when we don’t love ourselves completely, we can’t practice ahimsa with others fully. I also came to understand that deep-rooted resentment for another being—whether you verbalize it or not—is also himsa.

My friend is stuck in a relationship where there is no clarity or self-love. She is married to a man who turned out to be both impotent and disinterested in sex. This is not a problem in and of itself, but it contributes to their difficult situation. It was an arranged marriage.

To the world, this guy is kind, curious, generous, bright, and funny. She resents him for those qualities, as Mr. Charmer makes her feel invisible. He flirts, even if harmlessly, with other women without realizing how unloved it makes his wife feel. She gets insecure. When she gets upset and triggered, she berates him. “I can’t stop myself. I say whatever comes to mind.”

They eat healthfully, look fit, exercise regularly, go on meditation retreats. They do their bit for the environment and donate to charity. There is no physical violence or intention to hurt.

But both partners are thinking bad thoughts, bludgeoning each other’s emotions, gaslighting their partner’s needs, saying hurtful things, denying themselves basic human dignity, not living their truth, and dragging on in a relationship detrimental to their mental wellbeing.

They are both wonderful individuals, but they are a misfit as a couple. As an Ayurvedic counselor, I worry about their health. Think about the amount of cortisol released in their body from all this negativity. With their compromised immune system and unstable mental health, they are vulnerable to falling sick. What we think about ourselves or others can be as powerful as any physical attack when it comes to causing direct physical harm.

By being together in an emotionally volatile environment and creating harm to their emotional, mental, and physical health … are they committing himsa? Are they doing violence to themselves by staying in the relationship and depriving themselves of another chance at love?

I don’t claim to have a solution to their situation. But the couple has made me rethink ahimsa. I wonder if I am too attached to the literal meaning of ahimsa and need to relearn that everyone navigates complicated relationships in their own way. The reality is that the choices we make today are impacted by the unresolved traumas we have been carrying. Perhaps the violence and baggage from their traumatic past (both individual and collective) is so heavy that their situation feels safer and less violent to them?

Another eye-opening experience for me occurred as a result of teaching trauma-informed yoga to survivors of domestic violence and sexual assault. I write extensively about women’s empowerment and women’s health issues, but in working with survivors, I had to relearn, again, the definition of ahimsa.

In traditional yoga classes, hip-openers are considered stress-relieving asanas. But a yoga teacher should never teach Cat-Cow Pose or Bound Angle Pose in a class designed for survivors—they are sensual and potentially triggering.

Violence is telling people how to bend on the mat, forcing people to get into certain poses, and telling them what would make them feel good. What an egotistical approach to teaching yoga!

Similarly, the word “relax,” which can be such a commonly used term in yoga studios, can be upsetting to survivors. Many of them have been told by their perpetrators to relax. Deep breathing might unwind them initially. Then it leads to flashbacks, so breathing techniques aren’t a safe option. (It’s mostly grounding techniques that work for survivors, not relaxation techniques.)

So many of us push ourselves on the yoga mat because we want to be bendier and nimbler than the person next to us. Some people self-compete. Ahimsa reminds us to be gentle with ourselves. Comparison and criticism are himsa. Negative self-talk and self-harm are also subtle acts of violence.

To truly embody ahimsa, we must extend past the literal interpretation of not hurting or killing. Most of us don’t go around murdering other people. However, a large majority of us do not love ourselves fully. We say mean things, act out, get reckless with our words. Himsa is rooted in fear, which leads to insecurity. I don’t have to tell you that insecurity works like termites, causing extensive damage.

What if we can embrace ahimsa as total avoidance of harming anyone—not only by deeds, but also by words and thoughts? What if we start with ourselves? 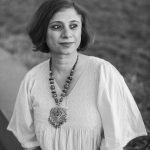 Sweta Srivastava Vikram is an international speaker, best-selling author of 13 books, and Ayurveda and mindset coach who is committed to helping people thrive on their own terms. Sweta is a trained yogi and certified...

I thought a lot about Gladys’s comment, secretly hoping I could avoid dying from the head down ...

The Art of the Lunch Break

Besides taking a lunch, holding meetings while walking and doing body scan meditation at your ...

What makes a place spiritual—and how can we benefit from spiritual places? Author Alice Peck ...

Thomas Hübl spoke with S&H about overcoming generations of trauma.

The Art of Receiving

Use yin yoga to target the channels of energy that fear, anxiety, and confusion flow through. ...

Karma: The Yoga of Action in an Unjust World