We talk to Karla McLaren about what we can learn from our anger, how to approach anxiety, why positive emotions aren't always positive, and more. 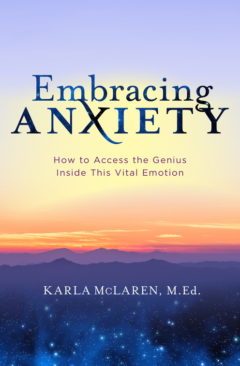 In Karla McLaren's book, Embracing Anxiety: How to Access the Genius of this Vital Emotion, she demonstrates her trademark view that all emotions have value while offering skills for becoming more adept at working with anxiety. Andrea Perkins caught up with McLaren to discuss what we can learn from our anger, how to approach our anxiety, and why positive emotions are not always positive.

S&H: In the book you describe how the practice of Conscious Questioning may be used when dealing with anxiety that is focused on things that are “too far in the future, too uncertain, or too complex.”

You write that if “uncertainty exists in many areas of your life, or if it lasts a long time, you and your emotions are going to need to build a myriad of self-care and mindfulness practices (and human support) to help you manage and thrive.” Can you expand on how Conscious Questioning and other practices may be utilized when it comes to remaining emotionally healthy during this time of pandemic?

Karla McLaren: It's necessary to feel anxiety when the future is uncertain, and knowing how to work with anxiety is a key to making it through difficult times with your skills intact. Anxiety is focused on the future, and in everyday situations, it will help you organize yourself, prepare your tools, prioritize your tasks, and meet your deadlines.

In times of loss, upheaval, and uncertainty like this, your anxiety may increase because there’s so much to do and too many options in the uncertain future. Conscious Questioning helps you and your anxiety think about and organize all of your ideas and possibilities so that you can prepare yourself as best you can.

If you try to ignore your anxiety, it will likely intensify because you need to be ready to make changes and plans at a moment’s notice. But if you let your anxiety spin out without any direction, it may create confusion and upheaval with its intense energy. Conscious Complaining doesn’t suppress or overexpress anxiety; it helps anxiety do its work so that it—and you—can relax knowing you’ve done what you can for the time being.

You write about how the idea that emotions are positive or negative is promoted in most of psychology, psychiatry, and neurology. Do you think this is changing?

You discuss how the expression and repression of emotions take many forms, but have one thing in common, which is “throwing the energy of emotions away.” What is the difference between expressing and channeling and how does this apply to artists? Is what they do considered channeling or expressing?

It depends on the art and the artist, but you’re right that art is usually an emotion-channeling practice. I see channeling as the middle path between shutting an emotion down with repression and blowing it up with expression. Both repression and expression are fine in many instances, but they’re not the only choices.

I found your description of anger to be extremely illuminating. You describe it as helping people set boundaries around what they value. How did you make that particular discovery?

I study emotions interactionally rather than individually, and by that I mean I’ve always focused on the situation in which the emotion appears. So, this thing we call anger: What happens before it appears? What are the conditions? What are people trying to do with their anger? What is the key function of anger?

It was clear to me anger is about our values and boundaries, and each person’s emotional skills determine how those boundaries will be created or rebuilt. Some people create harsh and cruel boundaries; some people set empathic and just boundaries; and some people refuse to set boundaries because they hate or distrust anger. But all of these responses involve anger.

Most people have been taught to despise anger due to the deeply unskilled way most people use it, but at its heart, anger is a beautiful emotion that is deeply honorable and deeply relational. You can’t get angry about things that have no value to you; anger tells you what’s vital and it gives you the strength and certainty you need to be just, vulnerable, and honorable. Or, it should.

(Read our story on how anger can help intimacy.)

I’m curious about apathy’s relationship to anger. You touch upon it in the book, but can you describe the relationship between those two emotions a bit more?

Like anger, apathy is also about boundaries, but it’s a bit concealed. I call apathy a masking state for anger because apathy arises when people either cannot or will not set boundaries clearly.

You’ll see apathy in poorly managed social structures—schools, workplaces, unhappy families and relationships—where people have no voice or power to make changes and can only hang on and hope for the best. When apathy is present, we let it be (it’s nearly always a response to an unhealthy social environment), but suggest people focus on what they value and perhaps plan a way out while they rely on the mask of apathy to help them persevere.

There are many spiritual and wellness communities that are quite adamant about the importance of positive thinking—to the point of being almost militant about it. What are some strategies you have found that work when interacting with such individuals?

I grew up in that positive-thinking consciousness, and if people are honest with themselves, they’ll know it really doesn’t work. My work on the importance of all emotions began because I saw the awful human toll that enforced positive thinking takes on vulnerable people.

So much gets shoved under the rug and into the shadows in these groups, and relationships break down because people have few emotional skills for difficulties or conflicts.

I’ve seen so many of these groups savage each other with smiles, or shun and banish people who are “negative.” Positive thinking turns tragic pretty reliably because it’s an attempt to avoid real life. Happiness and joy are fabulous emotions, but they’re just two emotions in a marvelous group of vital and brilliant emotional energies.

I’m not sure how I would speak to a militant positive-thinking person today; I think they would avoid my work, but something I tend to say in talks is if people separate emotions into the simpleminded categories of positive and negative, they will create immediate (and unnecessary) suffering in both directions.

Because if I tell you an emotion is positive, but you only rarely feel it, you might also feel shame, fear, anger, grief, depression. … Each of these emotions is important in its time and place, but why are all of these emotions being called to the scene? Now, instead of working with that original emotion, you’ve got an emotion pileup to deal with. That’s not a positive or loving thing to do to people.

It’s the same if I tell you an emotion is negative, yet you regularly feel it. Likely you’ll also feel shame, anxiety, grief, depression, envy, anger … and, again, you’ll have an emotion pileup that’s completely unnecessary.

The concept of negative and positive emotions seems so simple, but the consequences of this terrible idea mean that most people don’t learn how to work with their emotions at all because they’re either chasing after the allegedly positive ones as if they’re a prize at the fair or running screaming from the allegedly negative ones. That’s no way to live.

Is there anything parents can do to help their children form healthier relationships with their emotions?

Definitely. Teaching kids many words for different intensities of emotions helps them organize their emotional awareness, and research has suggested that a larger emotional vocabulary tends to create better emotion regulation skills all by itself.

Another thing parents can do is to learn how emotions work and create some emotion games to play when kids are calm and ready to learn.

For instance, parents can create an anxiety game where they present the child with a ridiculous task (such as building a working bicycle out of marshmallows) that needs to be done in a very short period of time. Then, they and the child can plan out the steps, learn about bicycle-building and marshmallow tensile strength, or find help, or ask for more time—which are all the things anxiety helps us do when we know how to work with it.

(Read our story on teaching mindfulness to kids.)

Andrea Perkins lives in Maui where she works for The Merwin Conservancy, a nonprofit centered around ecology and the imagination. Previously, she reported for Egypt Today magazine in Cairo, Metro Santa Cruz newspaper, and KCPW, the NPR affiliate in her hometown of Salt Lake City, Utah. She regularly reviews books and queries authors for Spirituality & Health.