Enjoy this excerpt from the introduction to Whole Body Prayer: The Life-Changing Power of Self-Healing.

When Jesus restored sight to the man who’d been blind from birth, they called it a miracle. But a miracle is only a miracle when you don’t know how it’s done. For millennia, the ancient sages of the East have harnessed the life force—known in China as Qi (pronounced “chi”) or in India as Prana—to perform all sorts of feats that Westerners may regard as miraculous, even though in Asia this type of practice is considered a science.

Scientific breakthroughs that are beyond one’s frame of reference can appear to be miraculous. Imagine introducing Google Maps to Marco Polo (as he traveled the Silk Road to China). Imagine showing a Bic lighter to a caveman. Or, better yet, imagine exposing that caveman to a master Shaolin monk from my homeland who, by harnessing the boundless power of Qi, is able to start that fire with his bare hands.

It is our job as humans to uncover the hidden mysteries and superpowers we all have within us. The mechanism through which we harness Qi is our own body. Jesus took on human form and performed his “miracles” as a human to show us that these powers are available to us. That was one of Jesus’s most powerful teachings. We are all healers. I am a living example of this. I share my story in the humble hope that it may inspire you to investigate and cultivate the “miracle” power that is within you, too.

Excerpted from Whole Body Prayer: The Life-Changing Power of Self-Healing, the true story of a master healer. Order it on Amazon right now or visit www.mywholebodyprayer.com for more information. 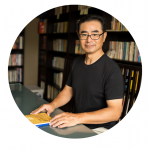 Christians (and non-Christians) can embrace fasting as a way to overcome our deep-rooted idea ...

The Spiritual Meaning of the High Priestess Tarot Card

Did you pull the High Priestess card? Learn the meaning of this major arcana card and how it can ...

Furious to Curious: Listening as a Spiritual Practice

How a couple handles tensions determines the trajectory of their relationship.

Psychotherapist Susan Aposhyan has taught meditation for more than four decades, in her book ...

Seeing Our Shadow in the Light of the Full Moon

“With new lenses, new compassion, new courage from our own inner work and our nightly dreams—we ...

“Pacifica is re-imagining itself based on values of integration and inclusion that are woven ...

My First Encounter With the Light

"There was a cry from deep within my soul for knowledge about the nature of the universe. Why ...

This book explores how you can experience personal transformation, peace, self-love, and ...