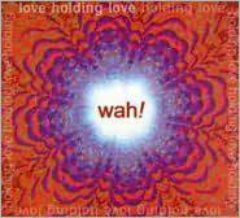 As a student at Oberlin College and Conservatory, Wah! was introduced to African and Indian music, studied the tabla, and learned to play Indian raga on the violin. She also began to study yoga and found herself deeply attracted to music that is used for healing. According to an interview with Integral Yoga magazine, Wah! believes that “Sacred music injects some of the faster-moving frequencies into our bodies and speeds things up a bit. By sourcing higher vibrational frequencies, healing can happen.”

Classical Indian music requires some education to be fully appreciated, and wanting her music to be accessible, she keeps it in the realm of folk music, introducing elements of pop and Western instruments, including the electric bass and Cuban drum cajon. “We want people to relax and feel comfortable, both with us and with themselves,” she says, “because that’s when the healing happens.”

Whether you appreciate Love Holding Love as a meditative background for daily activities or devote yourself to the listening, you will come away from the experience refreshed and energized, feeling cleaner and clearer.

Wah! serves as a volunteer teacher at women’s prisons throughout the United States and Europe, in conjunction with tour dates for her band. She has performed for meditation and yoga communities, including the Omega Institute, the Kripalu Center, and the Yoga Journal Conference. She toured with Krishna Das for three years and has written a book, Dedicating Your Life to Spirit.