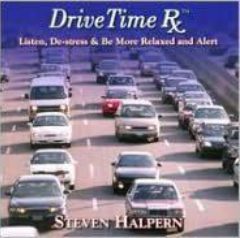 “One of the real-life challenges for many of us on a spiritual path is to remain mindful when driving, especially in heavy traffic or when cut off by another driver,” says Steven Halpern. “Harnessing the power of our subconscious mind works so well in other contexts, I wondered if subliminal audio technology would work on the road. The positive response to my new CD proves that it can — and does!”

Halpern is an award-winning composer, recording artist, and producer whose healing music has helped millions of people worldwide to activate the body’s innate relaxation response to create states of deep relaxation and inner peace. He was among the first researchers to produce a subliminal audio program and is one of the few to have continued working with the technology.

Most of Halpern’s work draws upon the music of ancient India, Egypt, and China and uses pentatonic (five-note) scales, rather than the seven-note scales of Western music. “This allows greater harmonic freedom,” said Halpern, “and doesn’t manipulate listeners into preconditioned responses.” Listeners also will note Halpern’s love for the jazz and rock traditions that were part of his early career, his experience as a performer in R&B bands, and studies of world music and shamanic sound traditions, all of which enrich his work today. He has been recognized by Keyboard magazine as “one of the 30 most influential keyboard artists of the past 50 years.”

Drive Time Rx is made to be listened to while driving, and both the up-tempo and more relaxing tracks contain inaudible suggestions spoken in the first and second person that will have a profound effect upon driving alertness, skill, and safety. A colleague who tried the CD on her commute to work remarked, “It really worked! I felt more peaceful and was surprised to find myself checking my rearview mirror more than I usually do.”