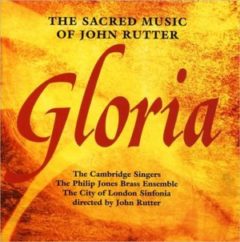 Probably the most successful choral composer of his generation, Great Britain’s John Rutter has received many awards and honors, including the Lambeth Doctorate of Music, conferred by the Archbishop of Canterbury (1996). Born in London in 1945, John Milford Rutter studied music at Clare College, Cambridge, where he was a member of the choir and then director of music from 1975 to 1979. His cantata Gloria had its U.S. premiere in 1974 and has since become a much-performed favorite.

Rutter’s works are chiefly choral and include large works like the Gloria, a Magnificat, a requiem, an opera for young people, and many arrangements, though he is especially well known as a composer and arranger of carols. His music bears the influence of the early twentieth century French and English choral traditions, as well as American classic songwriting and musicals. It is accessible music and unashamedly melodic.

In the first movement of his Gloria, scored for choir, vocal soloists, brass ensemble, organ, and percussion, Rutter utilizes brass instruments to create rising scaffolds of sounds upon which to hang the words of praise: “Gloria in Excelsis Deo”; the second movement is an otherworldly andante with haunting writing for the organ, while the third movement, lively and rhythmic, ends with vibrant fireworks. The rest of the album consists of varied anthems, including the robust “Clap Your Hands”; a setting of the well-known poem “All Things Bright and Beautiful,” filled with the innocence and freshness of childhood; and the especially lovely “God, Be in my Head,” a soothing work sung a capella.

Rutter’s music is contemporary yet accessible, written in an idiom that transmits a message from an older, gentler, less ambiguous time.