Film Review: Symphony of the Soil 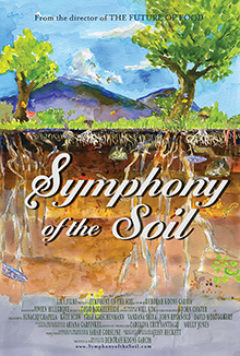 Symphony of the Soil
Directed by Deborah Koons Garcia

In theory, director Deborah Koons Garcia’s exploration of the wide, varied, and wonderful world of soil offers a great concept: A documentary that digs into the ways in which water, the atmosphere, plants, animals, and humans all deeply affect the resilience and quality of soil.

As a portrait of dirt, Symphony of the Soil doesn’t skimp on the science, delving into concepts like alluvial material and biodynamic agriculture. And the talking head experts Koons Garcia interviews aren’t just talking, they’re getting their hands dirty— digging into the soil, crumbling it in their palms, separating it into its various components. The richness of earth comes through in this tactile, beautifully shot film—it’s the kind of movie you want to run your hands through.

The issues presented here are complex, and to its credit, the film doesn’t shy away from tackling them. But Symphony of the Soil never quite manages to demystify this world. There’s so much information presented that, even before we’ve wrapped our heads around one concept, Koons Garcia is on to the next one.

As with her previous film, The Future of Food, Koons Garcia eventually builds to a more pointed argument: that organic compost is superior to simple fertilized soil in terms of guarding against erosion and other potential challenges to sustainability. Here, the film is more successful, because the issues are grounded in environmental concerns we can all understand. Not unlike water, soil is finite, and surprisingly delicate. The Symphony of the Soil may lose us a little along the way, but it’s crystal clear about the importance of this precious natural resource.