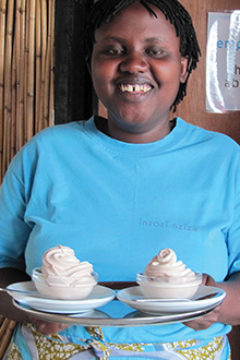 Forget what you think you know about the legacy of genocide. From the first frames of the remarkable documentary Sweet Dreams, which was filmed in post-civil-war Rwanda, images of exuberance and joy fill the screen. Side by side, Hutu and Tutsi women from 16 to 60 pound traditional drums with wild abandon, laughing as they play with astonishing dexterity.

Sweet Dreams focuses on Ingoma Nshya, Rwanda’s first and only all-women drumming troupe, and tells the story of how it came together after more than a million Tutsis were murdered at the hand of Hutus in the 1994 genocide. Founded by actor and playwright Kiki Katese, the troupe becomes more than a place for women to learn traditional artistic skills: it becomes a haven offering healing and reconciliation.

And eventually, it also becomes a business cooperative as the women open Inzozi Nziza (Sweet Dreams), Rwanda’s first-ever ice cream shop, in cooperation with the two Brooklyn-based owners of Blue Marble Ice Cream. Watching the women traverse the rough waters of business ownership is absorbing, but hearing their individual stories is heartbreaking. There is Regine, whose parents are in prison for murder; Marta, whose husband was executed; Seraphine, whose family was slaughtered when she was eight.

Seeing Seraphine standing in front of the home she is building from the proceeds from Sweet Dreams is enormously satisfying. It’s also a reminder that even a broken human spirit cannot be kept in check when it wants to soar. As the ice cream shop employees exhort from a bullhorn: “Come! Come and see the dreams of women!”