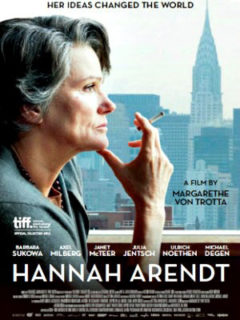 Margarethe von Trotta’s new film about the secular Jewish German thinker Hannah Arendt is not your standard biopic. Arendt’s life was, of course, an eventful one: A promising philosophy student who had studied with (and reportedly romanced) the philosopher Martin Heidegger, she fled the Nazi camps during World War II and settled in the United States, subsequently becoming a major figure on the literary scene as well as a pioneering academic (she was the first female lecturer at Princeton) and a leading Zionist.

Von Trotta, however, smartly focuses on a brief, pivotal moment in Arendt’s career. In 1960, the Mossad captured Adolf Eichmann, one of the architects of the Holocaust, and took him to Israel to be tried for war crimes. Arendt (in an understated, yet intense, performance by the great Barbara Sukowa) lobbied The New Yorker to send her to Israel for the trial. The result, however, was not the screed against Nazism that many expected, but a somber look at what Arendt called the banality of evil—the notion that horrific acts are the result not of monsters but of ordinary humans who thoughtlessly follow orders and refuse to reflect on the consequences of their actions.

Arendt’s work is now one of the cornerstones of political and moral philosophy, but at the time it prompted wave upon wave of criticism and hate mail. Seeing the toll that this took on such as remarkable woman, along with the knowledge that her work enabled the world to better understand evil, gives this film a rich, complex power.