The Other Side of the Ice 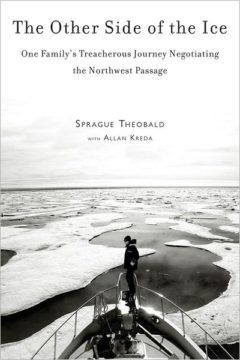 In 2009, author and filmmaker Sprague Theobald had the bright idea of navigating the notorious Northwest Passage (the North American sea route connecting the Atlantic Ocean to the Pacific) in a trawler and bringing along his former stepchildren, with whom he confesses to having had a complicated history. Although the treacherous journey through the Arctic Ocean, which had for centuries consumed many an explorer, has been made more navigable thanks to modern technology and, sadly, global warming, Theobald and his crew found plenty to contend with—mostly on the personal front, as the journey across the half-frozen and forbidding seascape forced them to face a variety of inner demons, including issues of abandonment, alcoholism, and just plain existential dread.

The documentary that has resulted from their journey is touching in unexpected ways. The gorgeous and haunting natural wonders around Theobald and his family both contrast with and enhance their own inner plights. When they pay a visit to the lonely graves of Sir John Franklin and his men, who famously perished in the mid-nineteenth century while trying to cross the passage, you realize that the world we’re seeing through Theobald’s camera—and that he and his family are experiencing firsthand—is pretty much unchanged from what those dying men also saw around them so many years ago. It is in these moments—contrasting human mutability with the awesome, almost absolute power of nature—that The Other Side of the Ice finds its true power.