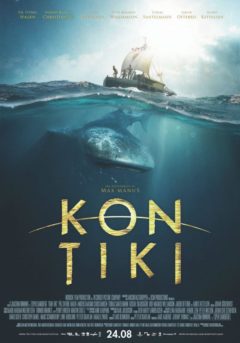 Norwegian adventurer Thor Heyerdahl’s 1947 Pacific crossing from South America to Polynesia in a self-made raft of balsa wood, and the book that followed, have fueled many generations’ fascination with exploration. This Oscar-nominated film about the crossing restores Heyerdahl’s achievement to its true grandeur, with a cinematic treatment that can hold its own against similar but bigger-budgeted fare like Life of Pi. Convinced that he can prove the Polynesians’ belief that their first man/deity, Tiki, came from the East, Heyerdahl (Pål Sverre Valheim Hagen), assembles a team of amateurs and sets off on the 4,300-nautical-mile voyage. He hasn’t prepared adequately—but he’s got charisma, and for a while, that’s all that matters. Until, that is, they veer off course and the raft starts to break up.

Although the film is replete with suspense, it’s often at its best when playing the characters on the raft off one another. Heyerdahl’s dedication to making the journey only with the technology available thousands of years ago to Tiki himself causes tension between him and his closest mate. But they eventually achieve an understanding. One remarkable scene shows the men on the raft while they contemplate their place in the universe: as they lie on their vessel, the camera pulls away from them, all the way into the atmosphere, reaching out finally into space before drifting back down to Earth again—a stunning display of how these desperate men have achieved a kind of togetherness with the cosmos, while adrift in the middle of the ocean.