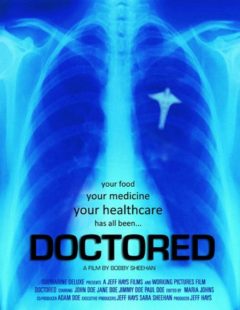 The battle between the medical profession and chiropractic arts is certainly nothing new, but Bobby Sheehan’s film is determined to chronicle the litigious contempt that the American Medical Association has shown for chiropractors, who were labeled as “quacks” and “charlatans” over the years. Sheehan shares the perspective of chiropractors, spokespeople, and patients who condemn the medical establishment and pharmaceutical companies for their obsession with their bottom lines. Any viewers who suffered from persistent pain only to eventually find relief at the hands of a much-maligned chiropractor may find themselves nodding along with the film at points.

But Sheehan really presents only one side of the argument. Even if you believe that the medical profession’s wild-eyed jihad against chiropractic treatment was an unfair and counterproductive one, you may be interested to find out what some of the actual arguments against chiropractors were. But we don’t really get them in this film.

Additionally, Sheehan’s film doesn’t quite scale beyond the chiropractor debate. The film wants to go further—to find in this smaller tale a microcosm of the broader debate around alternative medicine. That wider story is one that needs to be told, given how much Americans spend overmedicating themselves and our health care system’s ineffective focus on treatment and management instead of prevention and wellness. But it’s hard to get around the fact that the world of medicine—be it traditional, modern, alternative, or something else—is far too varied and broad to ever buttonhole into a neat little argument.