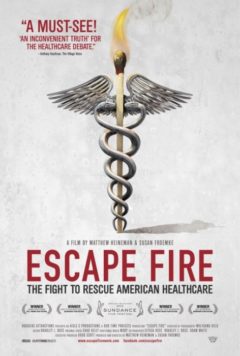 The catastrophe of American health care is so broad and deep that any attempt to make a cohesive film about it seems like a fool’s errand. So it’s both a relief and a surprise that Susan Froemke and Matthew Heineman’s powerful documentary manages to address so many aspects of the problem without having to sacrifice detail or dumb anything down. How do they do it? They get to what is effectively the root of the problem: health care in the U.S. today doesn’t focus on prevention, because that’s not as lucrative. As a result, plenty of potential solutions that could aid in prevention—the so-called “escape fires” of the title—go unsupported: everything from diet to alternative medicine to a better-informed public.

One of the chief interviewees in the film is Dr. Andrew Weil, and the film makes one of its most powerful points in arguing for alternative and holistic therapies. Perhaps the most harrowing segment features a wounded American soldier on his way home from the battlefield almost dying due to overmedication; these scenes, set on a plane, actually play like a suspense thriller. The filmmakers later catch up with the soldier—as he makes a conscious effort to abandon the pills the military gave him and finds himself benefiting from yoga, acupuncture, breathing exercises, and meditation—even though the latter forces him to confront many of his demons from the front.

The approach is multipronged, but luckily, Escape Fire doesn’t lose any of its urgency or power as a result.