Minds in the Water 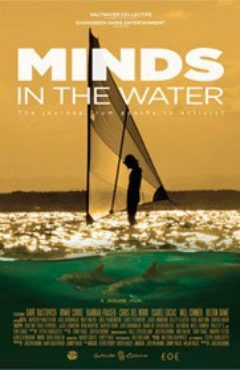 As a sport, surfing can trace its roots back to ancient Hawaii and Polynesia. As a subculture, surfing is a more recent phenomenon, dating back to the ‘50s on various Pacific shores.

Almost as long as surfing has existed in its modern form, there have been films about it. They have evolved from beach-blanket musicals through round-the-world searches for the perfect wave. More recently, surfing films have staked out their own genre, focusing on extreme permutations of the sport, along with mammoth mountains of water, and the modern demigods who ride them.

Now comes the game-changing Minds in the Water. As soulful as it is action-packed, it traces Dave Rastovich’s evolution from a pro-surfing competitor and photogenic product endorser to an environmental crusader for dolphins and whales.

With his poster-boy looks and disarming Down Under accent (he was born in New Zealand and grew up in Australia), “Rasta” sits on his front porch, recounting the transformation. Breaking the surf-movie mold, some of the best watermen in this one are dolphins. The film’s most amazing cinematography captures dolphins caught in the barrel of breaking waves, every bit as skillful and carefree as their human counterparts.

For his part, Rastovich dispels the usual stereotypes of surfers as laid-back free spirits or fearless adrenaline junkies. Onscreen, he is surprisingly soulful, articulate, and at times introspective.

If the film were just about Rastovich, it would connect the dots from competitor to environmentalist. But Minds in the Water takes the next step, becoming less and less about the ego of its protagonist ― and his photogenic costars ― and more about the world they’re part of.

The film encompasses ocean ecology, from the positive economic impact of converting from whaling to whale-watching in one Australian village, to the heartbreaking sight of Japanese dolphin slaughter in the notorious “Cove” that continues to this day. But underlying the obvious political message is something even deeper ― a reminder that in the ocean, humans and cetaceans are like distant cousins in the same family.

It’s a thrilling realization. What’s unexpected are the tears clouding your vision as you contemplate its ramifications.