by Tom Falkenstein
reviewed by A. Perkins 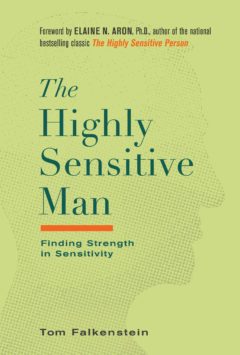 The concept of “high sensitivity” was pioneered in the 1990s by research psychologist Elaine N. Aron, who wrote the foreword to The Highly Sensitive Man. According to her research, highly sensitive people are easily overstimulated, have a propensity to deeply process experiences, and are emotionally reactive and empathic. In this book, cognitive behavioral therapist Tom Falkenstein extends Aron’s work to a specific focus on men. Of course, sensitivity is often more acceptable when it comes in a female package and while societal expectations affect both genders, Falkenstein argues that highly sensitive men navigate a chasm between what is expected of them and who they really are that psychologists have only begun to explore.

“Though it was founded in 1901, it took the renowned British Psychological Society until 2014 to dedicate a whole issue of its journal…to the psychological health of men,” he writes in a section titled Is Masculinity in Crisis? He argues that while ideas of traditional masculinity are being challenged in the current culture, men continue to feel societal pressure to conform to certain norms; they’re supposed to win, fight, provide, protect, control, discipline.

He mentions cultures and eras in which sensitive fellows have been accepted, even revered, and encourages the reader (assumed throughout to be a highly sensitive man) to celebrate his true nature. He does this in a series of chapters that take the form of pep talks, worksheets, practical exercises, strategies, and interviews. Theory and practice are seamlessly combined and there’s a helpful summary at the end of each chapter.

In a section about emotional regulation strategies, he writes, “When we’re too hot, we react to this physical feeling and our need to cool off by taking off our sweater or opening the window. When we’re hungry or thirsty, we eat or drink. Why don’t we do the same thing when we’re dealing with our emotions?” An approach he champions is that of “radial acceptance,” not trying to change the feeling, but one’s relationship to it.

A self-proclaimed highly sensitive man himself, Falkenstein wants men to emancipate themselves, to let go of outmoded thinking about what makes a man manly. It’s a call that somehow feels both radical and long overdue.