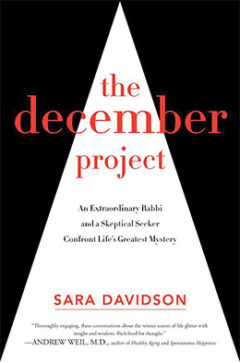 On the day that Zalman Schachter-Shalomi pretended to be dead, his 87-year-old body lay nearly naked on a massage table, swathed in a white sheet. Four men washed it with wet cloths, reciting the Song of Solomon.

It was the tahara, Judaism’s pre-burial ritual. Schachter-Shalomi, celebrated founder of the progressive, mystical Jewish Renewal movement, had taken the unprecedented step of undergoing a “practice tahara” as part of his own December Project: striving to face mortality with love and fulfillment, not just sorrow and fear.

He discussed death extensively with author Sara Davidson, whose college years in 1960s Berkeley paralleled his as the Holocaust-refugee rabbi of a radical synagogue where every Shabbat was “Lovers’ Night,” because “if you weren’t there with a loved one, you loved the one you were with.” Two tales intertwine: poignantly poised early in The December Project, Davidson navigates her own mysterious illness while—in explicit, moving passages—watching her mother die. As our spiritual tour guide to those final days of “life in its most human, down-to-earth simplicity,” Schachter-Shalomi sagely explains how to “let go” and “furnish your solitude with God.”

Such bracing, brave observations should empower readers of any age, as might this book’s slightly Twelve Steppish exercises. Life has only one inevitability: its end. Better to have pondered the infinite, experienced gratitude, and made amends by the time that moment comes when, as the rabbi says, “you hear the music slowly, softly drawing to a close.”