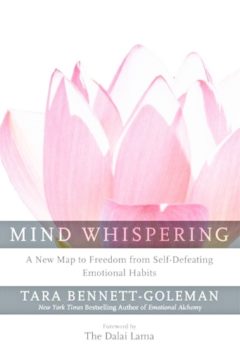 For centuries, humans used sheer force to get horses to do what we wanted them to do. But many in the equestrian community are turning away from “breaking” a horse toward a gentler form of training: natural horsemanship, sometimes called horse whispering. This method uses positive reinforcement, body language, and rapport with the horse to turn it into a full and willing partner.

In Mind Whispering: A New Map to Freedom from Self-Defeating Emotional Habits, Tara Bennett-Goleman shows how the same skills that a “whisperer” employs—empathizing and becoming attuned to another living being—can also help us humans understand and modify our own behavior.

Bennett-Goleman is a psychotherapist who fuses Buddhist and Eastern philosophies with cognitive psychology and neuroscience. She’s had an intriguing intellectual path, having studied meditation in Tibet; Schema Therapy with Jeffrey Young, who founded the Cognitive Therapy Center of New York; Japanese tea ceremony; and kathak, an Indian dance form. She is also a rider who with her horse, Sandhi, works with the “horsemindship” expert R.J. Sadowski.

Her new book distills what she’s learned into a meaningful discussion of the modes, or programs, that are hardwired into human brains. These primal modes come from the evolutionary process, a legacy that “makes our minds something like crowded zoos,” she writes. She teaches us to mind-whisper, to become aware of our modes and what triggers them. Using loving kindness, she says, we can gently lead ourselves out of negative modes into healthier emotional pastures. “You can’t change people, but you can change patterns.”