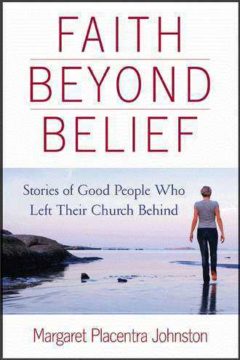 What brings people to leave their church, the traditions of their faith―and sometimes even their friends and family members―to embark on a personal journey of spiritual discovery? Can we be “good” without the rules of a church to guide us? And is it still possible to find a spiritual home within a church whose creeds and practices we may have outgrown? In Faith beyond Belief, an ex-Mormon, a Muslim “apostate,” and several former Catholics (including the author herself) are among those who tackle these issues, sharing stories to inform and comfort the ever-increasing numbers of Americans who are leaving their church behind.

Margaret Placentra Johnston takes the stages of spiritual growth out of the realm of theory to a rubber-meets-the-road discussion of the very real difficulties, and the joys, experienced by former believers as they navigate critical turning points on the path to spiritual authenticity. Based on the work of 14 spiritual-development theorists, including the postmodern philosopher Ken Wilber, Johnston’s book shows how moving through the stages of spiritual growth must, by its very nature, include a turning away from the dogmas and creeds of organized religion to something much more experiential, inclusive, and liberating.

Johnston’s warm, conversational, and sometimes confrontational book shares her vision for the future of of religion and gives even those who do not have a background in theology or philosophy a way to locate their place on the spiritual path and set their sights on a new kind of faith.