The Second Book of the Tao 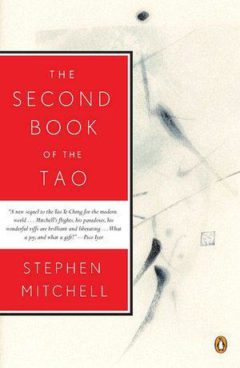 Adapted from two anthologies of Chinese wisdom compiled probably between 300 and 100 B.C.E. (the Chuang Tzu by Master Chuang, and the Chung Yung, ascribed to Tzu Ssu, the grandson of Confucius), The Second Book of the Tao is a sprightly complement to the Tao Te Ching, thought to have been written by the sage Lao Tzu. Author Stephen Mitchell found in the Chuang Tzu what he calls “a companion volume and anti-manual” to Lao Tzu’s classic manual on the art of living. “The Chuang Tzu had the perfect material for that: deep, subtle, with an audacity that can make your hair stand on end,” says Mitchell. “If Lao Tzu is a smile, Chuang Tzu is a belly-laugh.”

There are some passages in The Second Book of the Tao that overlap with the Tao Te Ching, as well as much that readers will find new, including meditations on dreams, death, language, relationships, the origin of the universe, doing and not doing, and compelling stories, mostly of humble artisans and servants, that tell what life is like when lived in harmony with the way things are.

“Chuang Tzu has been called a mystical anarchist,” says Mitchell, who agrees that his somewhat contrarian statements seem to put him at odds with Lao Tzu’s concern with “enlightened government.” But Mitchell finds him neither an anarchist nor a mystic. “He’s simply someone who doesn’t linger in any mental construct about reality, someone who lives as effortless action and peace of heart because he has freed himself from his own beliefs.” Chuang Tzu’s confidence came from his belief that he was being true to his teacher, Lao Tzu, in following the Tao, rather than seeking to follow in the footsteps of others. Mitchell describes him as having a “passion for the genuine, a fascination with words, and a constant awareness that the ancient masters are alive and well in the mind that doesn’t know a thing.”

The adapted texts of the ancient philosopher-poet are presented on the left-hand pages, with commentaries by Mitchell on the right, and both will inspire, teach, and provoke deeper exploration into one’s relationship with the Tao.

Stephen Mitchell was educated at Amherst, the Sorbonne, and Yale, and “de-educated” through intensive Zen practice. He is the author of the best-selling Tao Te Ching and other books, including The Gospel According to Jesus, Bhagavad Gita, and The Book of Job. Together with his wife, Byron Katie, he co-wrote two best-selling books: Loving What Is and A Thousand Names for Joy.