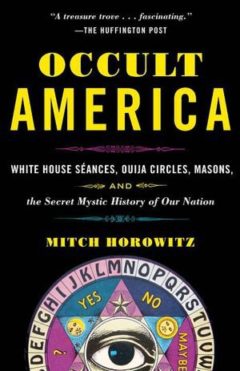 The Secret History of How Mysticism Shaped Our Nation
By Mitch Horowitz
Bantam Books, 2009, $27.00

Mitch Horowitz, editor-in-chief of Tarcher/Penguin in New York, has published many of the leading works in esoteric spirituality, ancient mysteries, and the occult. Here, he reveals the mystical and occult origins of some of our most valued philosophies, beliefs, symbols, and cultural expressions. He follows the threads of occult belief and practice from 1694, when Rhine Valley philosopher Johannes Kelpius arrived in the colonies with a small band of followers fleeing Europe’s Thirty Years’ War, to the New Age and Aquarian philosophies and beliefs of twenty-first–century America.

Horowitz writes that beliefs that are now widespread in American philosophy and culture — including the belief in the therapeutic value of religions, the existence of the mind-body connection in health, that human consciousness is evolving to higher levels, that thoughts determine reality, and that spiritual understanding can be obtained without allegiance to a specific doctrine or religion — can all be linked to their occult origins.

“Most twenty-first–century Americans, whatever their background, would probably agree with a majority of those statements,” claims the author. “To a very great degree, occult movements and personalities had introduced those ideas . . . into American life.”

Readers may find themselves startled by some of the revelations presented by Horowitz, including evidence that Buddhist and Hindu beliefs and practices may have been preserved from destruction by an American Civil War colonel who, with the Russian Madame Blavatsky, co-founded Theosophy, which then deeply influenced Gandhi’s work for India’s independence. Equally surprising is the fact that, at one time, the eighth-largest religion in the world was a mail-order faith, based in the shop of an Idaho druggist, and that the codification of the mysteries of antiquity into a groundbreaking and revered illustrated volume was accomplished by a 27-year-old bank clerk from New York. Moreover, many people who shaped our history were themselves shaped by occult and mystical beliefs, including President Lincoln, Frederick Douglass, Mormon prophet Joseph Smith, Black nationalist leader Marcus Garvey, voting rights activist and America’s first female vice-presidential candidate Victoria Woodhull, and other honored leaders.

Those who take this enjoyable and fascinating journey through the hidden history of our country will obtain greater understanding of and appreciation for the powerful and diverse spiritual energies that lie beneath the surface of American thought and belief.