The Earth Made New 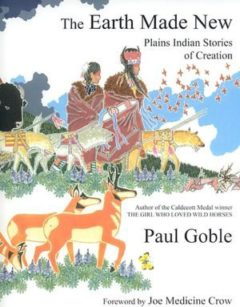 Joe Medicine Crow tells how he would follow his grandfather everywhere, listening to stories as they went about their daily activities. He laments the lack of such intimate and meaningful contact between the old and young in today’s world and suggests that books that preserve a people’s wisdom, like The Earth Made New, are essential to a culture’s survival.

Paul Goble, the adopted son of Chief Edgar Red Cloud, knows the deep and lasting damage to Native American culture, done between the years 1900 to about 1965, by forcing the English language and American ways upon Native Americans, separating families, and punishing children for speaking their native tongue. In an effort to recapture this creation story in as pure a form as he can, he has gone back to its earliest recorded version, writing it as a “spiritual essay” in the style of a Native American storyteller, leaving detail to the imagination of the listener. He suggests that readers use their inward ears and eyes to imagine the slow, repetitive speech and the facial expressions and hand movements that a native storyteller would have employed.

Beginning with a catastrophic flood that left nothing of the previous world visible, the story tells how the creatures who lived on and in the water cried out to Earth Maker to give back the land so that they could build nests and lay their eggs, and how the animals and Earth Maker worked together to create the land anew on the strong back of a turtle, giving North America the name “Turtle Island.” Earth Maker, compassionate toward his creation, then set each living being into the place best suited for it, as vast herds of buffalo, along with birds of all colors and sizes, appeared from beneath the hem of his robe. Finally, Earth Maker created man and woman from the clay of Grandmother Turtle’s back and gently led them to drink, saying, “I am your Father and Grandfather, and the earth is your Mother and Grandmother. I give you the joy and wonder of life and of everything around you to use wisely. I will always be close to you.” And although humans won the race that awarded them the role of caretaker for the planet, Earth Maker gave the injunctions that there should always be love between man and buffalo, and that power should be used wisely.

Told with great sensitivity and enhanced by colorful, dynamic illustrations that accurately represent native dress and crafts, the tale is particularly timely. Although it reminds us of the tremendous problems we now face, it also offers a message of the love of Earth Maker for all of creation.