One Square Inch of Silence 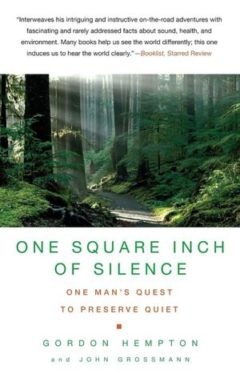 One Man’s Search for Natural Silence in a Noisy World
By Gordon Hempton and John Grossman
Free Press, $26.00

“One Square Inch of Silence is more than a book; it is a place in the Hoh Rain Forest, part of Olympic National Park — arguably the quietest place in the United States,” says Gordon Hempton, who has traveled the world as an acoustic ecologist, creating Emmy award-winning recordings of natural sounds. The extinction of natural soundscapes is of great concern to him. “Noise is quickly becoming a modern plague found nearly everywhere and often at unsafe levels. Noise has become so prevalent that it’s taken for granted,” the author states, noting that although noise disrupts people’s ability to sleep, to learn, to have moments of rest and quiet reflection, and to restore themselves to health (has anyone ever gotten really good rest in a hospital?), noise does not receive the attention given to other environmental concerns. The continued existence of silence, even in its last refuge, is precarious; there is currently no protection for silent places that would keep them free from the intrusion of human noise, thus making silence more endangered than animals or plants on the endangered species list.

Hempton and co-author John Grossman  visited Washington, DC, to present their case for the preservation of quiet. While there, they met a woman who lives near Reagan International Airport who, in the three weeks that flights over the city were prohibited following 9/11, heard for the first time the sounds of her neighbors in their homes. “I heard my community,” she said. “And it went on for three weeks. And when the planes resumed flying and the quiet stopped, I cried.”