What’s So Wrong with Being Absolutely Right 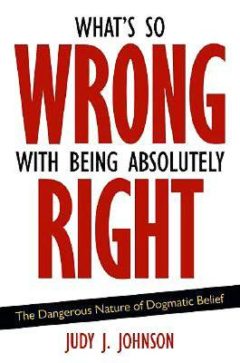 “At a time when major historical-political-religious developments threaten global peace, a second generation of theory and research on dogmatism is urgently needed to revive the largely abandoned efforts of the 1950s and 1960s.” Judy J. Johnson, Ph.D., a professor of psychology at Mount Royal College in Calgary, Canada, and the author of Suicide Prevention Program: A Group Facilitator’s Manual, has taken on the task of understanding dogmatic beliefs and those who hold them. Tracing the psychological and social roots and adaptive responses that lead to dogmatism, Johnson describes it as “a defective style of rational thinking” but does not attribute it to a lack of intelligence or education. Rather, she notes that biological predispositions “interact with a host of other individual and environmental conditions” that result in “closed-minded, inflexible” modes of thought.

Johnson warns that vigilance is necessary if one is not to become deluded about the truth — or lack thereof — of one’s convictions and the tendency to “short-circuit reason.” Of special interest is the chapter that explains “How to Non-Dogmatically Challenge Dogmatic Thinking,” with its suggestion that it is not “what” a dogmatist believes that is problematic; it is “how.” According to Johnson, the “demanding, emotional quality that accompanies what a dogmatist says is rooted in his or her dysfunctional beliefs,” and she traces the source of the problem to childhood when, though they lack the intellectual tools to evaluate a parent’s beliefs and admonitions, children are forced to accept them for fear of causing displeasure. The author has provided an in-depth study of the ways in which dogmatism compromises an individual’s cognitive, emotional, and social intelligence, and further, she describes how it is “a potentially dangerous threat to the social order.”