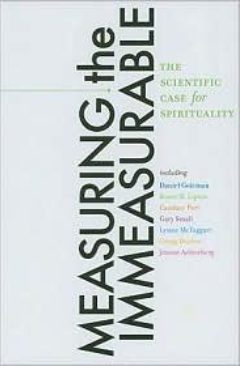 Since Western philosophical inquiry first divided science from spirituality in the 1600s, the two have been thought to be opposite and irreconcilable ways of experiencing and describing the world, so much so that even the language each used to describe that experience was different. This volume examines the plane where science and spirit meet, revealing new evidence that they are not as disparate as Western thought has made them out to be.

“Only recently have scientists begun to ask the right questions when it comes to spirituality,” says Dawson Church, author of The Genie in Your Genes, in his essay, “Psychological Clearing as Prelude to Soul Emergence.” That awareness, together with new tools of measurement and the language of quantum physics, has brought scientists to the realization that what once was thought to be “superstition” may indeed be an accurate, if different, way of describing the world, our place in it, and the power we have to effect change in that world. According to clinical psychologist Rick Hanson, many Westerners find that “science is the benchmark authority for what is true, and when it is in harmony with their spiritual or philosophical beliefs, that reduces the hindrance of doubt.”

This volume includes essays by, among others, Candace Pert, who discovered the opiate receptor, the key to the body’s mechanism for pleasure; Gary Small, who writes on how lifestyle impacts brain function; Daniel Goleman, writing on what happens in a moment of spiritual exposure; and Bruce Lipton, who describes how consciousness affects our genes, our health, and our evolution. Their words help explain the difficulties and illuminate the path to forging an alliance between science and spirituality.