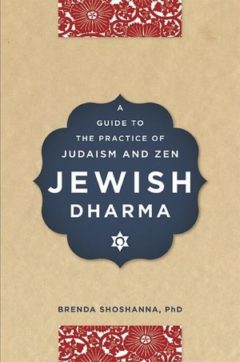 Brenda Shoshanna,  a psychologist, interfaith counselor, and author of several books, including Zen and the Art of Falling in Love, has been a long-term student and practitioner of both Judaism and Zen. Here, she brings together two strands of spiritual practice that would, at first glance, appear to be antithetical. Orthodox Judaism, with its emphasis on community and togetherness, the written word, analytical thought, and injunctions to remember the past, says: “These teachings are for all generations . . . [one should] hold on to the ways of old.” Zen practice, with its solitary meditation, koans to help bypass the thinking mind, and the “radical freedom” that comes with independent thought, says: “The past is gone, the future is not here, and the present appears for an instant. You are to leave the past behind and not dwell on the future.”

Dr. Shoshanna grew up in Brooklyn in an Orthodox Jewish household and community and has personally grappled with the difficulties of integrating the best of Zen and Jewish wisdom into a personal spiritual practice, in which opposites are embraced and used as a means for deeper exploration into the meaning and gifts of each. She admits that it was not always easy, saying that there were “days when one practice deepened the other; there were other days when I felt as though I were being pulled apart between the two.” Noting that even within one integrated tradition, contradictions and paradoxes may arise, causing confusion and frustration so deep that some might leave their practice, she states that these very obstacles offer opportunities for growth and maturity that would never have been realized otherwise.