Breakfast with Buddha: A Novel 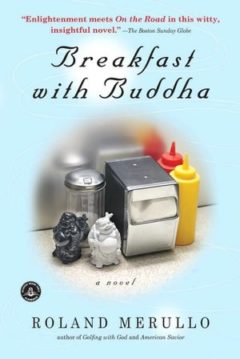 “I think of myself as Mr. Ordinary — good husband, good father, average looking, average height, middle-of-the-road politics, upper part of the American middle class.” But Otto Ringling’s “ordinary” life is turned upside down when he agrees to include his “odd” sister’s red-robed guru, Rinpoche, in a road trip from New York to his family home in North Dakota to settle his parents’ estate.

Author Roland Merullo combines philosophy, spirituality, and down-to earth characters in his tale of the adventures of a nice but somewhat cynical editor and his not-quite-welcome traveling companion. In a potentially dangerous encounter in a bowling alley, the guru blesses the leader of a group of threatening young men, whose snake tattoo and sneering smile put fear into Otto’s heart. “When it was finished, Rinpoche took a step backward and bowed. The man with the snake tattoo stood frozen in place. And then across his jagged features bloomed the smile he must have had as a young boy, before anything had been taken away from him by what he saw and heard, before the world had shown him its teeth and bitten him.”

Merullo is the author of seven other novels, including Golfing with God, and American Savior, as well as several nonfiction works. Breakfast with Buddha offers an entertaining and illuminating chance to experience the world through two different lenses simultaneously and stand in the position of observer, as a single life — and then many — are changed.