Four Mentors and the Spiritual Quest

Four Mentors and the Spiritual Quest

You are on a spiritual quest ... and you may meet four archetypal mentors, including the professor and the guru.

Every one of us is on a spiritual quest, whether or not we’re fully aware of it. Who among us does not seek fulfillment, meaning, and an understanding of our place in the world, in the universe?

When the seeds of my own quest, sown in childhood, broke through the soil of my psyche and into the sunlight of conscious awareness, I felt a sense of frustration, knowing that I was asleep, yet didn’t know how to wake up. I found some comfort in the words of Ramakrishna, who described his difficulty in trying to open a walnut shell when it was green, but how, once it was ripe, the shell could open with just a tap.

[Read: “A Pilgrimage: Making Sense of a Labyrinth Walk”]

The challenges I encountered in the classroom of everyday life provided my ripening process. But that process—not only in my case but for anyone—can be quickened and nourished by the mentors we meet along the way. Do you recall some mentors who’ve influenced and enhanced your life? Maybe it was a teacher in your youth or an author or a therapist or spiritual guide.

The two years I spent writing Peaceful Heart, Warrior Spirit gave me a chance to reflect on all the role models, teachers, and guides who touched my life—especially four significant (and radically different) mentors who opened doorways in my psyche over the course of two decades. In my memoir, I identify these mentors by name, but here I’ll refer to them by the archetypal roles they played in my life:

As the saying goes, “There’s only one Light, but many lamps.” Each of us can, by our own example, help light the way for friends and loved ones. Yet some lamps, like my mentors, burned with numinous light, at least for a time.

My years with the Professor and the Guru would inspire me to write Way of the Peaceful Warrior, while the teachings of the Warrior-Priest and the Sage would influence many books that followed. They revealed both the benefits and the liabilities of the spiritual search so that one day I might illuminate the Way for other explorers seeking meaning, peace, and awakening by various methods or means.

My mentors had significant gifts as well as human fallibilities. Collectively, their lives revealed that all teachers are human, and all humans have flaws. I no longer believe in so-called “perfect masters.” Yet I’ve retained an abiding respect to, and for, each of these imperfect teachers.

[Read: “How to Find a Spiritual Advisor.”]

The Guru revealed the profound and rare opportunity to surrender to the divine with every action and every breath. He attracted a growing community of devotees even as he cautioned against blind obedience, as a child obeys a parent, and also advised us to avoid reactively rebelling in the manner of an adolescent. Rather, he sought mature (or at least maturing) devotees, and reminded me that “before you can become spiritual, you have to become fully human.” (In other words, walk before you try to run—or fly.)

The Warrior-Priest’s unique work, based on his own background and gifts, taught me to trust my inner knower and showed me how to spiritualize daily life. Among the powerful tools he revealed were: the Life Purpose System I share in The Life You Were Born to Live, and prepared me to eventually teach The Peaceful Warrior Courage Training—spiritual transformation through knife-fighting.

The Sage brought me back to earth, to simple reality, and to the “Zen of ordinariness.” As Will Rogers once quipped—“It isn’t what you don’t know that can hurt you; it’s what you do know that isn’t so”—in the Sage’s company I had to reexamine all that I thought I knew, and acknowledge my debt to all those people known and unknown who had made my life and evolution possible.

Beyond the practices, principles, and perspectives they taught, my mentors gave me keys to doors that might otherwise have remained closed so that I might illuminate other lives as well. They appeared within a vast field of other teachers, gurus, and spiritual authorities, some benign, others deluded. (It wasn’t always easy to discern one type from the other.) The circumstance that attracted me to each mentor, and why I eventually moved on, provide the substance of my story. And while the story is mine, the way belongs to all of us.

Based on the book Peaceful Heart, Warrior Spirit. Copyright © 2022 by Dan Millman. Used with permission from New World Library. www.NewWorldLibrary.com. 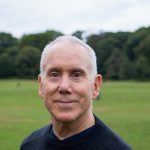 Dan Millman teaches “the peaceful warrior’s way” in the United States and around the world. Author of eighteen books published in twenty-nine languages, Millman is a former world-champion athlete, university coach, martial arts...

Julie Peters explains why witchcraft appeals to so many people—and how witches can borrow ...

Breathing in the Evil and Releasing the Good

Why is it so hard to jumpstart a meditation practice even when you really want to? There are ...

High Summer and the Divine Feminine

What kind of summer do you want to have? Explore the divine feminine within yourself, whatever ...

To travel light, invest in the perfect carry-on. Bring only this, and it’s impossible to ...

A Guide to Spiritual Companionship

A spiritual companion is much like a psychologist for the soul, there to support you on your ...