There’s a principle in Patanjali’s classical text on Yoga, the Yoga Sutras, called pratyahara. It’s usually translated as “withdrawal of the senses,” and it’s a part of the classical yogic plan to get ourselves out of the pain and suffering of everyday life and escape to someplace else.

This idea that there is a “someplace else,” that we can, through spiritual practices, escape the daily toil of being a self, pervades many different spiritualities. Heaven, Nirvana, Purusha, Samadhi: these are all essentially different translations of “someplace else.”

This has never really worked for me. I tend to be a bit of a spiritual cherrypicker: I take what works for me, and leave behind what doesn’t. So pratyahara was on my shelf of classical yogic precepts collecting dust because I never use or look at them.

Until a teacher of mine described it a little differently. Try it with me:

Notice where your awareness is. The weather outside the window, the sound of traffic. Now notice the room you are in, the colour of the walls, the temperature. Then the couch you are sitting on and the feeling of your skin in your clothes. Then your skin. Then your breath. Then your bones, your blood, your heartbeat, your thoughts, your emotions…

And so on, deeper and deeper inside yourself. This is pratyahara: honing the senses in closer and closer to your experience of the world. My problem was really with the word “withdrawal”: When I hear it, I think of taking something away. I think of closing myself off from the people in my life. I think of the painful withdrawal of breaking a drug addiction. I think of a lover withdrawing: it hurts, and it indicates a lack.

I can’t help but feel that it is not like this, my friend. What I’ve learned, being among the Samanas, up to this day, this, oh Govinda, I could have learned more quickly and by simpler means. In every tavern of that part of a town where the whorehouses are, my friend, among carters and gamblers I could have learned it.

Shocked, his friend asks what Siddhartha could possibly mean by this. He answers,

Siddhartha figures out that the path of withdrawal, of taking the senses away, and of numbness, is not the answer to the problem and suffering of life. Anodea Judith echoes this sentiment in her book on chakra theory entitled Wheels of Life:

Pleasure allows us to tune into our senses. It is emphasized in some Buddhist and Hindu belief systems that both pleasure and the senses are misleading–that through sensation we deprive ourselves of knowing the true nature of reality. Yet the senses are the very extension of that consciousness that seeks to know…..Extrasensory perception is only sensation in its most refined aspect. How else do we become sensitive? As Alan Watts wrote: “Ascetic spirituality is a symptom of the very disease which it intends to cure.”

When my teacher described the practice of Pratyahara the way she did, I started re-translating it in my head like this: drawing the senses closer. Feel your senses, all five of them, but snuggle up to them. Rather than looking out the window, turn inside and gaze at the mystery of everything inside yourself, with love and intimacy, rather than through lack. Spiritual practices are not practices of separation, they are a practice of falling in love with the here and now, the agony and the ecstasy of being a self. That’s where ‘self’ and ‘god’ start to blend together. That’s where we start to remember. 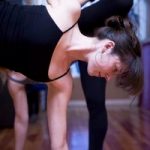 Julie Peters is a staff writer for Spirituality & Health. She is also a yoga teacher (E-RYT 500, YACEP) and co-owner of Ocean and Crow Yoga studio in Vancouver, BC, with her mom, Jane. She is the author...