Not only does yoga nidra meditation help you get a good night’s sleep, it also rids the body of harmful stress-inducing cortisol, boosts the production of “pleasure hormones,” and shifts brain waves into a beneficial state of regeneration and repair.

Both yoga gurus and neuroscientists agree that yoga nidra meditation can significantly improve the quality of our sleep, our ability to cope with stress, and promote mental health. If you are wondering exactly how this technique works in your body and in your brain, you’re in the right place.

Yoga nidra, or yogic sleep, is described as many things: a practice of self-realization, a meditation technique, a method of systematic conscious relaxation. But whatever you call it, the effects of it are pretty obvious: almost every practitioner walks out of the practice saying that they feel like they just had the best nap of their lives. After practicing yoga nidra with my students, I notice their faces are a lot more relaxed, their skin is glowing, and their bodies are more at ease.

There are many reasons for yoga nidra’s recent gain in popularity. Earth seems to be spinning faster by the second, and in our harried lives we’re unable to switch off our busy minds. Yoga nidra provides a mental refuge to a busy mind, a restful break that some practitioners say feels like another dimension.

The promise and benefits of yoga nidra are extraordinary, and meditators claim that they can literally feel its effects—a calm state of mind and better quality of sleep are not the only benefits. Even though we are only beginning to tap into the mechanisms of this kind of meditation on the brain and body, there is a solid body of work available that explains the mechanism of this practice.

According to the studies, yoga nidra affects the production of hormones and neurotransmitters in our brain and bodies.

As the parasympathetic system is activated in yoga nidra, there is a decrease in stress hormone cortisol. Excess cortisol circulating through the body as a result of stress is associated with a higher risk of type 2 diabetes, cardiovascular disease, obesity and inflammation, to name a few. Yoga nidra meditation helps the body rid itself of excess cortisol.

Yoga nidra practice also increases the production of GABA—an inhibitory neurotransmitter in the brain. GABA slows down signals between nerve cells and helps us remain calm even in stressful situations by regulating anxiety, lowering muscular tension, and stabilizing mood.

Yoga nidra also stimulates the production of pleasure hormone oxytocin in the brain. Oxytocin has become popular in recent years as scientists have discovered its role in parental and romantic bonding, sexual arousal, and reproduction. It’s a chemical that makes us feel good—safe, secure, calm, and at ease. It regulates blood pressure, reduces pain and, like serotonin, makes our wounds heal faster.

What Happens to Your Brain Waves?

As a part of yoga nidra practice, practitioners are taken through a stage called nyasa, where you are prompted to feel each part of your body in a specific order. As you do, nyasa triggers a relaxation response.

The relaxation response balances the two aspects of your nervous system: sympathetic (commonly called fight-or-flight mode or, more recently, fight-flight-freeze mode) and parasympathetic (rest-and-digest mode). This in turn aligns and balances the activity of your brain hemispheres.

Scientists have established a correlation between beta brain wave state and anxiety. So as you move into alpha-state, you are slowing down the brain activity and beginning to shift into a restorative, restful mode.

Yoga nidra can take you even deeper than that. As the practice progresses, you shift into a theta brain wave state which is associated with a very deep relaxation, creativity, memory consolidation, and stress release.

Yoga nidra can take us all the way to delta state, which is characterized by very slow brain wave oscillations. This is the most restorative and restful state, in which our organs and organ systems begin to regenerate and repair themselves.

Very few of us get to spend enough time in a delta brain wave state on a regular basis. This means we are not offering our bodies and brains an opportunity to restore and regenerate in-depth. With yoga nidra meditation, you can change that and begin to create a foundation for radiant health and wellbeing. 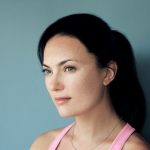 Elena Mironov (www.elenamironov.com) is a Zurich-based senior yoga and meditation teacher, educator and author with over 15 years of teaching experience, 90+ yoga retreats and over 8900 teaching hours under her belt. Her...