Seaweed is such a nutrient-dense food that very little is required to receive myriad health benefits.

Over thousands of years, seaweeds have gained a rich history as a medicinal food. They have been used to ward off sickness, infection, and chronic diseases, and to promote vitality, beauty, and longevity. When I began harvesting seaweeds, I had no idea of the absolute wealth of healing potential they possess. Thousands of studies have examined the properties of seaweeds and seaweed extracts and how they affect human health, with many more happening currently.

Seaweeds are the most concentrated food source of minerals on the planet. They store these minerals in chelated and colloidal forms, rendering them easy to absorb and bioavailable. Minerals are major components of our organs, tissues, glands, and foundational cells, and an optimal ratio of minerals in our blood is critical to our survival. Seaweeds are rich in the essential major minerals: sodium, potassium, chloride, calcium, magnesium, phosphorus, and sulfur. They are also an excellent source of essential trace minerals including iron, zinc, iodine, chromium, selenium, manganese, copper, fluoride, and molybdenum. Absorbing minerals directly from the ocean, seaweeds have evolved over millennia to have an optimal ratio of minerals. I think of them as nature’s perfect mineral supplement.

Of particular importance is seaweeds’ abundance of natural iodine, an essential mineral that an estimated two billion people worldwide are deficient in. Iodine is a major component of the human thyroid gland, which regulates metabolism and is associated with protein synthesis, children’s growth and development, lactation, and other vital functions. Iodine deficiency is reported to be the leading cause of preventable intellectual disability.

Seaweeds are also among the highest food sources of vitamins. Most edible kinds contain vitamins A, B‑complex, C, D, E and K, as well as many complementary elements required for the optimal absorption of these vitamins.

Seaweeds are high in both soluble and insoluble fiber, now known to be a critical factor in gastrointestinal health and the prevention of chronic diseases such as cardiovascular disease and type 2 diabetes.

Seaweeds are a good source of protein, too, some containing as much as 45 percent (dry weight), and they are also a source of essential fatty acids, including significant amounts of omega‑3s. They also contain a wealth of unique biologically active compounds not found anywhere else in nature. Some of these compounds offer astounding benefits to human health.

Seaweeds themselves are known to grow in some of the harshest environments on earth and not only survive but thrive. In particular, seaweeds growing in the intertidal zone are exposed to desiccation, extreme variations in temperature and salinity, wave action, a plethora of both airborne and marine bacteria, viruses, and fungi, and, in colder regions, freezing and thawing. Their adaptions to these extreme living conditions have resulted in a medley of novel therapeutic substances exclusive to seaweeds.

Since seaweeds are such a nutrient-dense food, very little is required to receive the myriad health benefits. Eating a small amount, just a few grams per day consistently, is the best way to support and enhance health. Bathing in seaweeds is another way to instill benefits. The skin is an efficient way to absorb many of seaweed’s nutrients, and bathing in seaweed can offer different therapeutic benefits than consuming it does. Seaweed baths have been used for millennia to promote an overall feeling of wellbeing, in addition to many other therapeutic applications.

I feel a responsibility to share with others what I have learned about the protective and supportive qualities of seaweeds. [The Science and Spirit of Seaweed] is an invitation to contemplate these findings and to investigate further.

Reprinted from The Science and Spirit of Seaweed: Discovering Food, Medicine and Purpose in the Kelp Forests of the Pacific Northwest (Harbour Publishing) by Amanda Swinimer courtesy of Harbour Publishing. 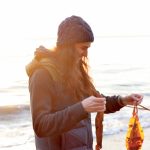 Amanda Swinimer’s deep love of the ocean brought her to the west coast of Vancouver Island, Canada, where she started her own business, Dakini Tidal Wilds, in 2003. For two decades, Amanda has been sustainably harvesting, by...

Ways to Turbo Charge Your Brain

3 Ways to Celebrate Your Canine Companions

Yes, I’m one of those crazy dog lovers. My husband and I have a household of older and ...

The Sensory Experience of Tasting Tea

Guided Meditation: Opening Your Heart to Compassion for Yourself

In this guided meditation, take a true self reflection of gazing into yourself with love.

3 Tips for Building a Meditation Habit

The surprising history of the yummy treat, plus tips on sweet ingredients that do good