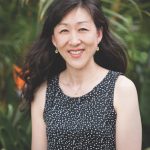 Grace Ji-Sun Kim received her PhD from the University of Toronto and is Professor of Theology at Earlham School of Religion. She is the author or editor of 20 books, most recently, Hope in Disarray; Keeping Hope Alive;...