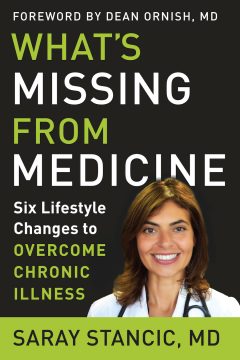 Saray Stancic, MD, is a board-certified physician and the subject of the documentary, Code Blue. After serving as chief of infectious disease at the Hudson Valley Veterans Administration Hospital in New York, she joined the viral hepatology team at Roche while continuing to see patients at the Bronx Veterans Administration Hospital in New York City. In 2012, she founded one of the first lifestyle medicine practices in the country.

S&H: You write that “we have come to define ourselves by our symptoms, rather than by our potential.” The implications of this, not just on our health but on every aspect of our lives, seems to me very profound. Can you talk a little about how the medical system in particular contributes to this?

Saray Stancic, MD: Symptoms lie at the surface. It’s only when we dig deeper that we discover the true causes of disease. In clinical medicine today, however, we are largely trained to treat symptoms. So, for example we may treat a case of pneumonia with antibiotics, but if we pursue the matter more closely, we learn that prediabetes, obesity, and depression have largely contributed to the development of pneumonia in this patient. Of course, treating with antibiotics is what is immediately needed, but without also addressing the deeper issues, the patient may return 6 months later with yet another acute set of symptoms. This is how our current healthcare system fosters what I call the Forever Patient, because they keep coming back ... forever. What many patients like this one truly need is sweeping, comprehensive, lifestyle changes.

As you make stunningly clear, the dearth of nutrition education in most medical schools is shocking in light of the evidence supporting the integral role nutrition plays in health. How hopeful are you that nutrition will be incorporated into medical training in the near or distant future?

Diet is the number one contributor to premature death. It actually surpassed tobacco some time ago. It’s hard to wrap our heads around the notion that our lunch may be killing us more effectively than cigarettes, but this fact has gone largely unnoticed. And it raises the critical question: How can our academic institutions continue to ignore this? In 1985 the National Academy of Sciences surveyed US medical schools and found that the nutrition education offered there was inadequate to meet the future needs of the medical profession. And they recommended changes be brought to curricula. Yet, thirty-five years later, we are largely in the same place as before. The good news is that there are medical schools that are now introducing—or already have added—a comprehensive nutrition education component as part of their curriculum, and many have added culinary medicine modules. So, I believe things are changing for the better.

I found it particularly poignant when you explained that the “current paradigm is one in which the patient is passive and powerless, convinced that our genes define us, food choices don’t really matter, and perception drugs will save us.” What, in your view, are the first steps that need to be taken to shift this paradigm?

To underline this idea, I often give the example of my mother and the relationship she has with her doctor; she follows his recommendations to the letter and rarely if ever questions a prescription or the logic behind a treatment plan. She belongs to the generation that believes that if you go to the doctor and leave without a prescription, then the doctor may not be very good. So, we need to work on educating more people to move beyond this assumption about what a “good doctor’s visit” looks like, for one.

Additionally, I often hear from patients who have been told their elevated cholesterol is genetic and that there’s really nothing they can do about it. It’s not uncommon for me to hear, “Dr. Stancic, everyone on my mother’s side of the family has diabetes. I can’t avoid it. It’s my destiny!” But the truth is that the reason so many in the same family may be diabetic is not because it’s embedded in their genetic code, but because they have been passing down learned behaviors. Children learn so much from the examples set by their elders, and in generation after generation family members pass on a constellation of bad habits that might include unhealthy food choices, beer, cigars, and poor responses to stress. The cycle can be broken, however. All it takes is one person to say, “I choose a different path.”

And doctors need to stop propagating the myth/falsehood that “it’s all genetic.” It’s not. The paradigm is shifting, and it will progress more effectively when more doctors unite behind the power of lifestyle choices. And since doctors primarily receive these lessons during their training, it means that medical schools must change their messaging.

You point out that the reason nutrition and other preventive measures aren’t routinely practiced is because there are no financial incentives to do so. How can we change that?

It’s difficult to change a model when so much profit is tied up in sustaining it, but we have to do so, as our future depends on it. Change starts with education. When people begin to realize that their diet or their lack of mobility is doing as much damage to their health as a daily smoking habit, then large scale change can begin.

I believe our experience with big tobacco can be a model for us here. While smoking is still a problem today, we’ve made huge improvements in reducing the number of smokers in this country, and it all started with education.

The fact is that lifestyle medicine reduces dependence on costly pharmaceuticals, reduces hospitalizations, and improves overall quality of life. When people have all the facts, they will begin making different choices in greater and greater numbers, and the pharmaceutical companies and food conglomerates will change accordingly.

You mention that the Hippocratic oath contains the phrase: I will prevent disease whenever I can, for prevention is preferable to cure. Are there other elements in the oath that are brushed aside? What role is the Hippocratic oath performing in our current medical model? Is it more aspirational than practical at this point?

The Hippocratic oath serves to remind doctors of the great responsibility entrusted to us by the public. It should keep us humble and grounded. The oath includes passages on treating the ill to the best of our ability, maintaining patient privacy, and committing to teaching those that come after us, but for me no aspect of the oath is more important than preventing disease and preserving the health and wellbeing of our patients.

Sadly, this is where I feel so many doctors fall short. We’ve become so focused on treating symptoms with drugs or surgeries and have placed little emphasis on prevention. This is made worse by a financial model that rewards disease rather than health.

As you clarify in the book, Preventive Medicine is not the same thing as early detection of disease. Can you talk a little more about this?

We often hear physicians discussing the importance of practicing “preventive measures” such as colonoscopy or mammography. But these tests allow us to detect disease early, not prevent them before they even begin. True prevention, also called primary prevention, means preventing the disease at the outset. For example, a colonoscopy may detect a precancerous polyp and lead to its removal, and this is important because otherwise the polyp could continue to grow into a local cancer. So, colonoscopies serve a great and important purpose, but this early detection is better categorized as secondary prevention. Primary prevention would be engaging in lifestyle choices that help in preventing the polyp from forming in the first place. And primary prevention is what lifestyle medicine is all about.

What can legislators do to help simplify the complicated relationship between medical institutions and the business world?

Far too much power has been given to insurance companies instead of doctors and their patients. This imbalance has led to an unnecessarily complicated and convoluted healthcare landscape. Any legislation that serves to empower the doctor-patient relationship can do a great deal of good, provided that the doctors are focused on prevention as much as they are treatment (with pharmaceuticals), and are willing to educate their patients that the lifestyle choices they make can be just as important, if not more so, than any drugs that can be prescribed.

Read the review of What's Missing from Medicine here.

Andrea Perkins lives in Maui where she works for The Merwin Conservancy, a nonprofit centered around ecology and the imagination. Previously, she reported for Egypt Today magazine in Cairo, Metro Santa Cruz newspaper, and KCPW, the NPR affiliate in her hometown of Salt Lake City, Utah. She regularly reviews books and queries authors for Spirituality & Health.