S&H: How long have you been an illustrator? What led you to this career?

García Gordillo: Painting has been my job for over 30 years. Mostly I have done large-format paintings on canvas or paper, and only occasionally some illustration work, usually book covers. With the economic crisis (of 2008), I continued painting but mostly in smaller formats. I started drawing with colored pencils, gouache, using collage. Later I began drawing with the iPad, which is what I use the most today. One thing led to another ... and so illustration became my main activity, and painting took a back seat.

Your images like the one with the angel projecting light from her hand—do you have a story in your mind and then create an image to match the story?

Well, it depends. Sometimes the image comes first and sometimes it is the story or the feeling that you want to convey that appears first. This illustration is part of a series about winged beings and represents dream and inspiration. Dreams have always been important to me. I dream a lot and sometimes I have more permanent memories of dreams than of real experiences.

You have a whole series of women doing yoga. What does yoga mean to you?

I have practiced yoga, tai chi, and meditation for years. These practices are a very important part of my day, to get to know myself and find meaning.

Illustrating these themes allows me to somehow unite these two aspects of my life. I intend to translate into images what I feel internally—what is silence, calm, energy for me. I do not know if I succeed but I assure you that I try.

A few years ago I did a master’s degree in meditation, relaxation, and mindfulness at the University of Barcelona. My final work was on the relationship between art and meditation. On one side art can be used as a meditative anchor and on the other side meditation helps the artist focus his work.

Right now I am illustrating a book on chakras and occasionally I illustrate articles for a yoga magazine on philosophy related to yoga, which has led me to learn about very interesting topics that I knew very little about, such as sankalpa, duality, doshas, impermanence, and so on. 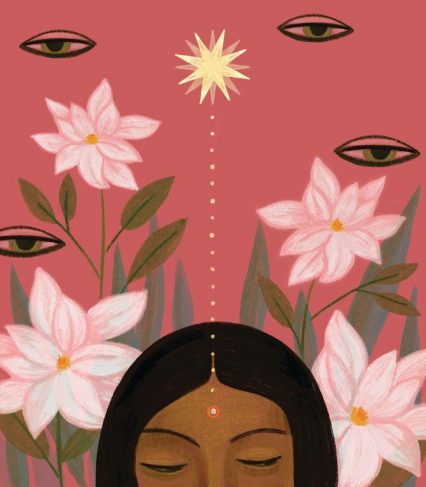 My Star by Carmen García Gordillo

I love your colors. Do you choose certain colors to convey certain moods?

Color is a very important part of my work. With color, sensations are transmitted that cannot be communicated in any other way. Color has its balance and I try to find it. Now it is easier, there are even programs that generate color palettes, but for me it has been always something intuitive. You have an idea and you combine colors until you feel that everything fits and then you get a calm feeling. It is also true that color has its own language. If you want to convey quietness it is difficult to do it with a red color. But I think that above all it is a matter of balance, and even with red tones you could transmit a warm and cozy tranquility.

Do things like snakes, stars, and cats mean something specific to you? Or are they symbols that can mean different things depending on the image?

In the same way that the female figure is very present in my work, I also feel myself very inclined to introduce animals and plants. Snakes, in addition to having some mystery, have a sinuous shape that works for me. Really, in my daily life I’ve been surrounded mainly by dogs and cats. There are symbols that have accompanied me for years—moons, stars, eyes, palm trees, all kinds of animals, all these are elements related to mystery, to the hidden. Sometimes I look for exactly the symbol I need to use, but sometimes I just use something because of its shape.

In your work I see women who appear to be from so many different places—Japanese women, Chinese women, blondes, and so forth. Can you tell me about this?

I can’t tell you exactly why, but I’ve always been interested in different cultures. I have friends from many parts of the world. I like to travel and discover new landscapes, and I like to experiment with food recipes from other countries. Arabic, Japanese, or Korean are as common in my kitchen as paella. I suppose all that is reflected in my work.