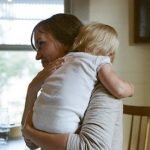 Anna Keating is the co-author of The Catholic Catalogue: A Field Guide to the Daily Acts That Make Up a Catholic Life (Penguin Random House) and the co-owner of Keating Woodworks, a handmade furniture...