The hugely popular cure-all isn't going anywhere, but what happens next?

Given the overwhelming marketplace (CBD-infused toothpicks, anyone?)—it’s hard to remember a world before CBD and even harder to fathom what’s next.

“From a consumer perspective, everyone wants to be healthy and go the natural or organic route,” says Clarence McSwain, licensed hemp farmer and owner of both The Hemptender Dispensary in Durham, North Carolina, and the Halcyon Leaf CBD brand.

“There is an element of intrigue that CBD touts some of the benefits of medical marijuana without psychoactive effects.”

Hemp-derived CBD products provide natural relief for people without the unwanted side effects, explains John S. Boccella, a chiropractor and co-owner of The Hemp Company in Raleigh, North Carolina. “The public is tired of taking synthetic prescription medications that are loaded with side effects.”

While noningestible CBD-infused options are plentiful—“Everywhere you look there is hemp lotion, facial cream, shampoo, etc.,” acknowledges McSwain—the ingestible market is still the base of the industry. Ingestibles are dominated by tinctures and gummies. 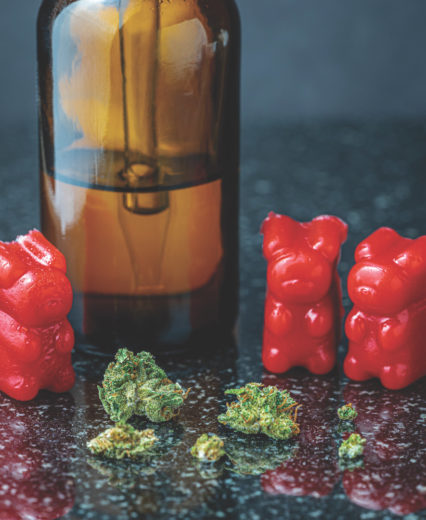 Tinctures outsell gummies overall, says Boccella, but his The Hemp Company sells more units of gummies than tinctures. McSwain sees a similar consumer trend, explaining that while tinctures are more popular than edibles given their more consistent absorption, at The Hemptender Dispensary gummies are the top sellers, as they offer a more familiar approach to CBD.

With the likes of CBD water, CBD-infused Cheetos knockoffs, and other infused food and bevs galore taking to market, it’s worth considering whether tinctures and gummies will occupy a smaller part of the market in the future.

Not really, says Boccella, “because the most cost-effective, efficient method to supplement CBD is by ingesting a tincture or inhaling.” He sees the budding CBD-infused nips and sips as more “recreational“ than for health and wellbeing. For example, he explains, “water has minerals, but if you are mineral-deficient you should take a mineral supplement.”

Adds McSwain, “There is still a gray area and a bit of stigma for major manufacturers in terms of adding CBD to ingestible, commonly known products.” So, despite the novel ways of ingesting CBD that may pop up at your corner gas station, tinctures will always have their place—a projection that helps to define the future market.

SATURATED BUT NOT SATED

“I think big box stores are already trying to cash in on the CBD craze,” says Boccella, “but I don’t think there will be as much success in that arena.” CBD products are personal, he adds, and therefore require a personal experience. “Big-name retailers are already in the mix,” says McSwain, “namely grocery and drugstores. For some well-known brands, it is definitely a good thing, and it increases exposure for the industry as a whole. However, they lack the intimacy and in-depth product knowledge of a smaller, local dispensary.”

While there is a lot of competition in the industry, Boccella believes room for growth remains as the industry becomes more specialized and tiered. He nods to the automotive industry for comparison. Some companies will focus on topicals and others on ingestibles; some products will be designer/high-end and others entry level.

But the explosive nature of the growth is likely not sustainable. Companies and farmers, both small and large, that started early in the game with significant capital are filing for bankruptcy as they find it difficult to turn a profit in such a saturated market.

“I personally know several farmers who will not be growing this season due to a glut of material in the market and heavy losses last year,” McSwain says. But, at the same time, “We have just scratched the surface on what cannabinoids can do. There is definitely room for growth in the market as more research is done from a medical standpoint and as more is uncovered on lesser known cannabinoids such as CBG, CBN, and THC-8.”

Boccella agrees that more research is needed into the health properties and potentials for these myriad cannabis-derived compounds. But those other initials—CBD’s cannabinoid cousins—have industry insiders excited.

“The future of CBD is bright,” says Boccella, “as it is for other minor cannabinoids like CBN, CBG, and CBC.” Some studies, he notes as an example, suggest CBN has sedative properties, while CBG has anti-inflammatory properties.

“I believe that the most health benefit comes from hemp-derived CBD and medical marijuana (with a calibrated ratio of CBD & THC in a finished product like a gummy). Recreational marijuana (which is high in THC and low in CBD content) is purely for just that— recreation. No different than going out to a bar and drinking a few shots of tequila.” —JOHN S. BOCCELLA, DC

With more research will also come reduced stigma. CBD is already becoming more widely accepted, notes McSwain. “The key in [further] shifting the stigma is education—interviews and articles such as this one,” he says. “It’s informing the consumer that you can reap the medicinal benefits of cannabis while still being able to go to work and cognitively function in daily life.”

Once more research is done and regulations are in place, projects McSwain, hemp/CBD may surpass legal marijuana/THC in sales and popularity in the not so distant future. And as the CBD industry continues to try to differentiate itself from pot culture, normalization is still a work in progress—but ubiquity and education are helping. “I hope as cannabis products (hemp-derived CBD products, in particular) become more widely used,” Boccella adds, “there will also be more education on the benefits and, therefore, less negative stigma.”

That education, in part, will take place at retail. “That is the value in coming to a reputable brick-and-mortar CBD store—education and customer service,” says Boccella.

In an already saturated market, knowing where to begin is the beginning of consumer education. McSwain says it is important to be educated about the key factors in selecting a quality CBD product. “Know the extraction process, whether it is third-party tested, where is it sourced and if it is natural; know the difference between broad- and full-spectrum products; and look at the company’s reviews,” he says. With that information in hand, you can begin to find your own preferred products and applications.

Boccella suggests shopping at a clean, well-organized local CBD store with a good reputation for educating customers, where all products are third-party tested with access to Certificates of Analysis (COA). While CBD is not ailment-specific, he notes, a sales associates should be well-trained enough to make a customer-specific product suggestion. “For example,” he says, “someone who is taking several medications for pain might do best using a topical CBD product because it will not interfere with the metabolism of the medications.”

And “stay away from products claiming to be CBD sold at gas stations or convenience stores,” adds McSwain, “as you don’t know exactly what you are getting.”

What you are not getting in vetted CBD products is a trendy tincture for 20-somethings. Xers and Boomers are buying en masse. For Boccella, a large percentage of his repeat customer base are educated, professional people over 45 years old, with people in their 60s or 70s a big part of that group. “They typically like to use tinctures and topical products for relief of pain and inflammation,” he says.

McSwain sees a similar buyer trend: “A large portion of our clientele is 55-plus, as they are the demographic that can benefit most from CBD,” he says. “They are looking for alternative solutions to degenerative ailments.”

The takeaway? “CBD is by no means a fad,” says McSwain, “and it’s not going anywhere anytime soon.” Boccella agrees: “The future is exponential,” he says—with both professionals noting again more research is needed.

“We can already isolate individual cannabinoids from hemp,” says Boccella, “but we don’t know their full potential without research. At some point, we will know which is best for migraine or PMS or low back pain or anti-cancer. Think of the possibilities!” 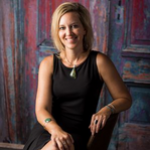