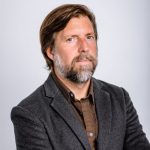 James Nestor has written for Outside, Scientific American, The Atlantic, Dwell, The New York Times, and many other publications. His book Deep: Freediving, Renegade Science, and What the Ocean...