Getting out of our comfort zone is not always easy, but we may find that releasing our grip allows it to feel a little more like grace.

It was spring, full on.

The flowering quince, the forsythia, and the tulip trees were still in full flourish. Daffodils sprouted under trees in golden swaths. Showers of white spirea cascaded like fairy waterfalls over mossy stone walls and around masses of crystal blue irises so thick and wide and deep it looked as if the sky had decided to lie down and take a rest in my garden.

This colorful morning scene was all the more delightful because a spring storm had blown in overnight, and the temperatures had dipped so much that it was downright chilly, so I decided to build a fire to enjoy with my morning tea. After laying the kindling, I went out to the porch and chose a piñon log, both because they catch more easily and because they smell so lovely when they burn. You can’t really smell it in the house that much after the first few minutes, but outside it smells amazing, so I consider it my neighborhood community service.

Just as I was about to toss it into the fire, I noticed a tiny movement along a split ridge in the bark. Looking more closely, I saw a small black spider who had been disturbed when I picked up the log and now seemed to be waiting to see what was going to happen next.

“Well, good morning, little,” I said to her as she sat motionless and unsure. “I’m afraid you are going to need to relocate. This property has been condemned.”

I took the log outside and tried to shake her off, but she held on tight. I picked up a leaf and shoved her gently, trying to coax her off, but she darted into a crevice. I pounded the end of the log on the porch floor to try to dislodge her, but she was hanging tough. I broke off a small sliver of bark to try to agitate her from her potentially fatal hiding place, but instead of jumping off, she slipped between the bark and the wood where it was very tight and I couldn’t reach.

I decided to put the log down and step away, hoping that when her home stopped moving around, maybe she would emerge on her own to see if the coast was clear. Sure enough, after a few minutes, she took a couple of cautious steps out from the crevice. I stayed still. She moved a few more tentative steps out, all the way into the open, and I quickly brushed her off the log and onto the porch floor with a long iris leaf. She circled several times, apparently disoriented.

“I’m sorry, honey,” I said. “You’re going to have to find another home, but you have no idea how much worse it almost was for you.”

I walked inside and plopped the log onto the fire, and as I did, I started thinking about all the times in my life when I had clung to something or someone as if my life depended on it, not realizing until much later that what my life really depended on was letting go.

I thought about how many times the big scary power that appeared to be pushing me mercilessly out of my comfort zone was really the hand of God guiding me to safety, right before my old life was about to burst into flames.

I thought about how that spider would never understand that I was saving her life, but that she, in her little metaphorical spidery way, had helped to remind me to trust in the process, to release my grip, and to always watch for each and every tiny affirmation that, even in the midst of upheaval, all is well. All is well.

Excerpted from One Hundred Daffodils by Rebecca Winn. © 2020 by Phoenix Flower, LLC. Reprinted with permission from Grand Central Publishing. All rights reserved.

Read Ram Dass' piece "How Does Your Reaction to Change Affect Your Life Experience?" 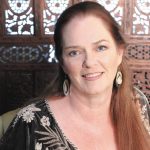 Rebecca Winn is a multiple award-winning landscape designer and creator of the inspirational Facebook blog, Whimsical Gardens. Her eye for nature’s beauty and her unique blend of...