“Déjà vu, prescience, and synchronicity each give us hints of a larger, more subtle, field of interconnecting thought, awareness and expression beyond the usual linear extension of time and space.”

A truism states that, “There’s more going on than meets the eye.” We cannot always rely on the evidence of our senses or even the thoughts and feelings of our body and mind. Experiences happen that make us question our belief in a three-dimensional linear reality. Here are some examples.

Perhaps, like me, you have had the experience of knowing someone is about to call you on the phone seconds before the call occurred. This happens quite often with my daughter. I’ll be thinking of her, or more accurately, she comes into my consciousness, and then, a minute or so later she will call me. The physical reality of the phone connection had yet to take place but some nonphysical connection had already been made.

I’ve also had the experience of saying or reading a certain word and then the very same word would show up in a snatch of conversation, or on the TV, or radio, often just moments after the word came to mind. Coincidence? Perhaps, but strange, nevertheless.

Occasionally we will be in a setting, on a street or with a person and there is a distinct sense that we have experienced this moment or this interaction before. Perhaps we could interpret it as some type of alignment of the memories in our subconscious mind or a biochemical reaction. Often, though, the déjà vu experience is so intense that these explanations don’t fully capture what is going on.

The opposite of déjà vu is prescience, a pre-knowing of things to come, even when we don’t understand the significance of that prescience at the time.

When I was thirteen years old I took a 500-mile bicycling trip with my dad from Cardiff, where we lived, across England to Dover and back. It was a great adventure and I still recall many of the places we went and the experiences we had.

Two scenes particularly fix themselves in my mind just as if I had taken a snapshot and stored it away for a later time. In the first, I was standing, holding my bike, in front of a college in Oxford looking down the street. I became fascinated with the scene. It was as if someone told me, “Look closely.” Five years later I became a student at that very same college, and when I stood, age 18, at the entrance to the college and looked down the street once again I was startled to recollect the scene from years before. Getting a place at Oxford was a big deal for a boy from an ordinary high school in Wales and I began to consider what was going on beyond the physical details of applications, exams, and interviews.

The second experience on that bicycle trip happened a week or so later. My dad and I cycled into the town of Hastings and we came to a beautiful open space that looked directly over the Old Town to the sea. I remember thinking to myself, “I’ll be here again.” Fifteen years later I took a teaching job in a nearby town and some new friends I made lived just 200 yards from that same open space. I continue to be friends with them today, more than 40 years later, and have experienced that beautiful green meadow overlooking the sea many times.

Before I continue, I want to assure you that I do not live my life in a bubble of fantasy and wild imaginings, seeing connections and significance where none exist. I share these stories because they were real and powerful enough for me to look a little deeper into the nature of reality. They opened my mind to the non-linear aspect of life.

Déjà vu, prescience, and synchronicity each give us hints of a larger, more subtle, field of interconnecting thought, awareness and expression beyond the usual linear extension of time and space.

The best way I’ve found to describe this non-linear world view is as a multidimensional field or matrix, infinite in scope. We are all moving through this infinite field yet, with every step, every thought and every volition we subtly change its interconnecting web. To paraphrase the famous Taoist insight, the wing beat of a butterfly in China causes a shift of the air in America.

On my literal journey across England at age 13, I had moments when I saw something reflecting on the web that gave me a glimpse of experiences yet to come. When a word repeats itself to us a moment after we have voiced it, perhaps it is a reminder that, in a sense, everything is happening at once, even though this seems impossible to a mind conditioned by time and space.

So, if it is all here already, does that mean there is no free will and that everything must be predetermined? My answer to that is yes and no. Yes, because the field is here and now in its infinite completeness. No, because our journey through the field is also one of infinite possibility. Modern quantum physics reinforces the idea that we are in a both/and universe. There are neither particles nor waves just tendencies to be so, determined by observation, awareness and action.

“There is nothing new under the sun,” says the Teacher in the book of Ecclesiastes, and yet our highest awareness, symbolized by the Cosmic Christ in the book of Revelation, declares, “Behold, I make all things new!” Is it OK to say they are both right? For me, yes. Banality and wonder rest in each other’s arms. Nothing and everything dance the universe into existence.

How does all this help us live more fulfilled and happy lives? The kernel of it for me, is that we are co-creators of our lives, responsible for how our reality shows up. We are invited to take the infinite web of the living field of life and fashion it in ever more creative and expansive ways. The moments when the universe has winked at us confirm the truth that all things are possible. Don’t settle. Stay aware, and with a light touch, determine to be all that you can be. 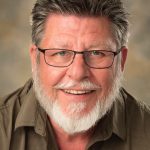 Paul John Roach is a native of Wales, UK. A graduate of Jesus College, Oxford, he has BA and MA degrees in English and a postgraduate degree in Education from the University of Wales. Paul was ordained at Unity Ministerial...