“Subscribe to plants, animals, stars, / music, the baby who can’t walk yet”

Some people feel lost inside their days.
Always waiting for worse to happen.
They make bets with destiny.

My funniest uncle gave up cursing bad words
inside his head. He says he succeeded
one whole hour. He tried to unsubscribe to
the universe made by people. He slept outside
by himself on top of the hill.

When Facebook says I have “followers”—
I hope they know I need their help.
Subscribe to plants, animals, stars,
music, the baby who can’t walk yet but
stands up holding on to the sides of things,
tables, chairs, and takes a few clumsy steps,
then sits down hard. This is how we live.

Here is a simple poem about hope and disappointment. Many human beings make vows to themselves to be better people in some way or another —which they try to keep—and often fail. But the impulse to do such things should never be seen as a failure. Also I find the concept of “followers” intriguing in our modern world. Here I was thinking of Janna, (see below), not myself.

“When I heard about Janna Jihad Ayyad I became fascinated by her. I heard this child, was posting videos of what was going on in her village, which is very close to the village my palestianian grandmother ended up in. The Tiny Journalist came out of a merging of perspectives with a cross-generational story of what is going on in Palestine.

I tried not to write in her voice. In these poems, it’s my voice, or perhaps the collective voice, since I do skype video calls with many children in Gaza.

Read more about Naomi's life in our re/VIEW featured in our November/December issue.

Carmen Giménez Smith's I will Be My Mother's Apprentice 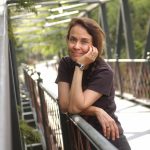 Naomi Shihab Nye is the author and/or editor of more than thirty volumes of poetry. She has been a Lannan Fellow, a Guggenheim Fellow and a Witter Bynner Fellow. Her numerous awards include a Lavan Award from the Academy of...