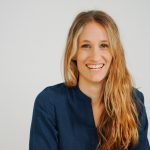 Deborah started writing poetry at the age of five. She fell in love with the mystics in her teens, and began a life of insatiable spiritual inquiry. She lives in Rome, Italy with her husband and son, and is constantly...