Our actions in this moment (and lifetime) can affect future lifetimes—explore how.

Once we accept that our past actions have created the current conditions in our life, we can conclude that our current actions are creating our future, a future over which we have some control. One of the gifts of spiritual practice, especially meditation, is that it can foster the introspection necessary for us to become more aware of our patterns of thought and behavior. I learned early on to couple meditation with introspection to shed light on undesirable thought patterns that I wanted to change so they would not pursue me in the future.

In my book When the Bright Moon Rises, I show how one life affects another. The story centers on a woman poet of the Tang Dynasty in China named Shu. Under the guidance of her Taoist teacher, she recalls her previous life as a concubine and remembers the false accusation against an aspiring poet, who was said to have had an affair with her. In retribution, that poet is banished and his books of poetry burned. Although she bore no blame in the matter, the guilt over having inadvertently caused suffering for this man pursues her into her next life as Shu, now a poet herself, and she burns her own poetry, freeing herself from the guilt that had clung to her.

There is no one way to free oneself from samskaras, the mental and psychological imprints from the past, the behavioral patterns and effects of actions taken. All thoughts and actions leave imprints, carried from one life to the next, lying dormant until conditions are right for them to emerge and be addressed. The most potent method for neutralizing these imprints is through meditation, which affects the electrical currents in the spine and brain, where samskaras and memories are embedded. There is a science to this process of slowly freeing ourselves from that which impedes our progress.

Most of us hold unexpressed feelings that we may not even be aware of, subtle leftovers from the past. There could be latent anger or fear, and this eventually must be resolved. There is often unfulfilled desire or clinging that also must be cleared. Feelings of lack, guilt, or unworthiness must be rectified for us to progress in our soul journey. Spiritual practice can not only help us realize the purpose of life but also resolve that which is unresolved and help set beneficial patterns for the future.

I was a shy young woman, very hesitant to speak out even at small gatherings. Then came a time when I was asked to open an august assembly of religious leaders at the United Nations General Assembly Hall in New York. I did my best to excuse myself, but when it became clear that I could not, I had to overcome terrible stage fright in order to offer the opening remarks to the 1,500 religious leaders gathered, most of whom were senior male officials. Seeing that there were so few women at this gathering, a year or so later, I founded the Global Peace Initiative of Women to provide a platform for women to assume leadership on critical global issues.

Soon after, I began to recall numerous previous births, where I felt my voice as a woman muted and I was unable to express myself. I recalled the frustration in not having control over my life. When I saw the irony of the situation, I realized that in my current life I have been given an opportunity to overcome a thought pattern that had pursued me through many births. That issue—not being able to raise my voice as a woman and be heard—is now behind me. But I think about the other thought patterns I need to change so they will not affect my future.

In seeking to shape our future, we must also look at the troubled relationships in our lives. For many years, I had a difficult relationship with my mother, who was unhappy with the direction my life was taking. Instinctively, I began to hide things from her, particularly my meditation practice, which was foreign and even frightening to her and was not mainstream at that time. When I recalled a lifetime in India during Mughal rule when I had to hide my worship of Krishna, retreating to a closet to do my practice, I realized that I had carried this unhealthy habit over from the past and I had to change it. I began to speak more openly about my spiritual practice and work. I also made a concerted effort to meet my mother where she was, and in the end we developed a lovely relationship. I was able to fully be there for her in her last years and to know that we had brought to completion something that had been unfinished.

When I was seeking to publish my first book, where I recount a number of previous births, several friends told me to publish it under a pseudonym because of my work in the interfaith field, but I only laughed to myself. I was free of the impulse to hide.

To create a positive course for oneself in the future, one must become aware of and address unhealthy patterns of thought and behavior. One must work through difficult relationships and examine one’s desires to see which are helpful and which are not. The questions that should drive us are, Who do we want to be in the future? What do we want to change about our life? What is left undone that cannot be completed in this life but needs to be resolved for us to move forward? Reflection on these questions is a step toward shaping the future we desire, one that will bring us a step closer to our goal.

Sponsored by: SitaRam Press and the Global Peace Initiative of Women (GPIW)

The mission of Global Peace Initiative of Women (GPIW) is to gather young leaders and wise elders to listen, reflect, and explore ways to foster systemic changes that create unity among humanity and a loving, respectful relationship with Earth and all of life. 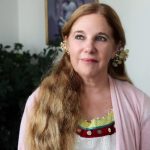 Dena Merriam is an international interfaith leader and the founder of the Global Peace Initiative of Women. She has been a student of Paramahansa Yogananda for 45 years. She is the author...

From the Editor: Pilgrimage

“Despite the English language’s overstocked lexicon, no other word conveys the combination of ...

We spoke with Lucy Campbell about Northern influences, diversity, and her possible future as a ...

Painting a single meaningful image, especially from your dreams, can be powerful. Images can and ...

Understanding How Special You Are

“The Enneagram teaches that there are nine different personality styles in the world, one of ...

Being an empath is all about ‘feeling’ the emotions of others. Sometimes we need extra tools to ...