"The Woman Who Fell From the Sky" by Jennifer Steil 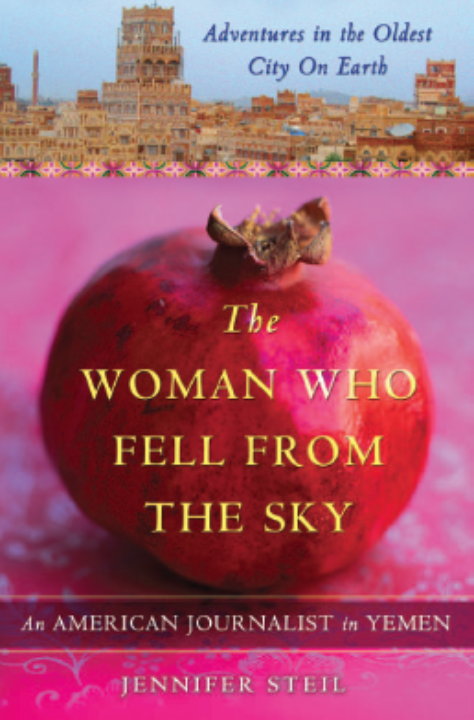 An exceptional travel writer can make a new and unfamiliar place invade your thoughts and senses so that you feel as though you’ve actually been there. If the writer is really good, you might find that the everyday people around you begin to feel more like strangers than do the people in the book, whom you’ve come to understand and even love.

Jennifer Steil is just such a writer. A journalist by trade and a liberal New Yorker at heart, she went to Yemen’s ancient, beautiful, and very conservative Muslim capital city, Sana’a, to train the Yemeni staff of the Yemen Observer in the skills of journalism — in English, no less. When her assignment came to an end, Steil couldn’t bring herself to leave the country and the group of feisty reporters she had come to love. Taking up her old life in New York was no longer an option, so she accepted an offer to stay on as the editor-in-chief of the Observer, at least in name — the Yemenis do not allow a woman to actually assume the power that goes with that role. That decision led not only to some potentially dangerous encounters and adventures but to a deepening of her love for Yemen and its people, and to meeting, in that highly unlikely place, the love of her life.

As you might expect, The Woman Who Fell from the Sky: An American Journalist in Yemen is full of hilarious crosscultural missteps, descriptions that bring the sights, sounds, and scents of the city to life, and the heartbreak and joy of Steil and her reporters as they valiantly attempt to live in the 21st century in a place where ancient traditions and beliefs contradict much of what we consider to be freedom and progress.

Few of us will probably ever visit Yemen, but Steil’s book takes you as close as you can get without the plane ticket. In revealing the love and respect the people have for their traditions, even as they long for much of what the West has to offer, she helps us understand how different yet how very much the same we all are, no matter where we live.