Why It Matters Who Tells Your Story

Why It Matters Who Tells Your Story

“And thus we observe/ Seed to root to plant to flower to seed/ Earth to bloom to earth/ A soul returns.”

I love telling stories—personal stories, stories that surround life-cycle events, stories that surface and honor the essence of a person or a couple. There is nothing more compelling or more enthralling for me than to be invited into a milestone moment—be it a love story of the couple, a birth story of the newborn, a coming-of-age story of the adolescent or the story of a loved one’s legacy and the life they leave behind—and be asked to craft a one-of-a-kind ceremony.

Muriel Ruyeser says, “The world is not made of atoms. The world is made of stories.” And telling the story can make all the difference. The most damning response to a typical ceremony whether it be a funeral, or a wedding is: “It could have been anybody. There was nothing personal in there.”

Raised in a conservative Christian denomination, I had the intuition at 10 that I was born to be a minister and a writer. While these themes have played out over the years in unexpected ways, I feel that now at 66, as a certified Life-Cycle Celebrant®, I have come into a full realization of this early seed of intuition with the chance to make sacred milestone celebrations. While I love the outward facing role of officiant and connecting with everyone in attendance, it has been the act of creatively crafting “the story” and finding a metaphor that captures the essence of that story that I have loved most and that I think has mattered most.

The main difference between a rote, fill-in-the-blank ceremony and a personalized, breathtaking ceremony with a “Wow” factor is in the telling of the “story”. Left to friends and family, the story can meander, end up in the weeds, or worse—get lost in a choking set of emotions or in the “idiosyncrasies” of uncle George. Left to clergy, too often the officiant is beholden to a pre-scripted format that allows little “real life” into the ceremony. Telling the story matters. It’s a must-have to an authentic, heart-warming, cathartic ceremony. Who tells your story matters. Just ask Alexander Hamilton whose legacy was captured and first told by Elisa and then passed down generations until it ended up in a Broadway megahit by way of the genius storyteller, Lin-Manuel Miranda.

I love bringing fresh ingredients to each ceremony that captures what is as unmistakable and as unique as the individual that is being memorialized or couple that is being married. When it comes to memorials, I love listening in on the life of an individual and discovering a unique metaphor that pops out of the story and then I use it to seam together the eulogy as well as the ceremony. Here is one example.

“If there is a standout icon that instantly telegraphs his life, it is his saxophone. There were those who nicknamed him 'liver lips' as he had that perfect, plumped-up pucker that just seemed born to play the saxophone. He got his talent honestly as his Dad was an accomplished saxophonist and who, in his Chicago days, played in the band for the likes of Mel Torme and Steve Alan … Jerry navigated through life by way of his saxophone. It was the true tool of his trade though he had a variety of jobs through the years—selling cars, driving trucks, doing construction work; it was this tool that brought people together and sort-of jumpstarted their joy and sense of fun.“

When it comes to a wedding, I listen and look for a metaphor that is very personal to the couple that gives a poetic image to the inherent significance of their coming together.

“Consider a Colorado beauty of special significance to Amanda and Chris—the aspen grove, dense with its distinctive shimmer of leaves. Each tree is unique and glorious in and of themselves. And yet, hidden beneath this individualistic beauty, the truth that they are but one tree connected by one root system. So, like the aspen tree, Amanda and Chris give a unique expression all their own and yet they are joined here today by a common root source of “spirit”— a tap root of inspiration, imagination, and creativity. Like the aspen tree in an aspen grove, they are fed by something quite ancient, quite mysterious, quite sacred—we call it love.”

The best compliments I get for a ceremony is “How did you know so-and-so?” I think to myself, “Mission accomplished; their essence or the essence of their marriage, was rendered so personally that I was mistaken for a best friend.” As a result, everyone leaves having touched upon something intimate, something authentic, and often something fun or something sacred. Who tells your story makes all the difference. Just ask Alexander Hamilton.

Here is an original poem from my book Prayers on the Road Home that captures my “hidden agenda” of honoring the unmistakable essence of the decedent when doing memorials.

And thus we observe:

Seed to root to plant to flower to seed—

earth to bloom to earth—

And what it takes is what it leaves,

like the scent of cinnamon and cloves or of lilacs and roses,

where (name) has been and will be:

an unmistakable essence we knew as (name of honoree)—

an unmistakable essence we instantly still know: (for memorials I enumerate signature qualities of the deceased)

in time now reawakened by our memories:

in time always through the legacy he/she leaves us:

in time beyond time when we shall meet again.

For more on Ben Martin, visit his website. And learn more about becoming a certified Life-Cycle Celebrant®. 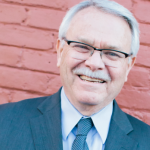