Dharma and Karma are interlinked concepts. Asking what’s the different between them is like asking what’s the difference between your breath and your blood. We can talk about it, we can say well here’s what breath is composed of, here’s what blood is composed of, and yet the truth is they’re really very interconnected. They work together. They work to keep us alive. You can’t pull breath away from blood and expect blood to be able to keep you alive, or pull blood away from breath and expect breath to keep you alive. There’s an interlinking-ness. The same is true with karma and dharma.

Dharma is the “why,” and karma is the “what”—the what I’m doing. The actions I’m performing are based on my dharma. The repercussions I will get from that karma are based on my dharma. For example, taking a knife and stabbing it into someone’s chest is a bad act. It will give us bad karma. Well, that’s only true if you’re a murderer, but it’s not true if you're a surgeon. That’s what surgeons do. They take scalpels and knives, and they stab them into people’s chests in order to save their lives. Sure, it doesn’t always work, people die on the operating table, people die post-op. So, in both cases the end result could be death, but the surgeon is fulfilling his dharma as a surgeon, and if he fulfilled it with integrity and sincerity, he’s not going to get bad karma for the fact that this person ended up dying post-op. But the murderer who stabs somebody to rob them or because they’re high on drugs or whatever the reason is absolutely going to get the karmic fruit.

There’s a beautiful teaching that Pujya Swamiji taught me very soon after I first came to India that said, “Engage yourself in karma, under the shade of dharma, with an awareness of Brahma.” This was my mantra before I was given a mantra. “Engage yourself in karma”— yes, we act. As Krishna says in the Gita, we can’t help but act. I could sit here on my hands and squeeze my eyes shut, but I’d still be acting. Acts of omission are just as much acts of commission. Failing to act is just as much an act as acting. If there are people suffering and there are things that need to be done and I have the ability to do them but I am not doing them, that is an act. It’s just an act of omission rather than an act of commission, and I'm still going to get karma from the act of omission.

We engage in karma, we engage in action, ideally karma yoga so it's action with the intention of that union, “under the shade of dharma”—with the knowledge of who, both the universal dharma as well as this individual dharma. My duty may not always be pleasant. Arjun really would have preferred to run off to the jungle and meditate rather than have to take up his bow and arrow. He was prepared to pretty much do anything other than take up his bow and arrow. But, that was his dharma, and as a warrior he needed to do that. Lord Krishna tells him, “To die in the fulfillment of your dharma is far better than to live happily in not fulfilling your dharma.”

Under this shade of dharma, I am fulfilling my duty, “with the awareness of Brahma”—with the awareness of God. It doesn’t matter whether we say Brahma or Christ or any other way we envision the divine, it’s just the awareness of being a tool in God’s hands. God is actually doing it all, I’m not the doer, but I’ve been blessed to be chosen to be a tool in God’s hands. I’ve been blessed to be used. We must allow ourselves to be used and not to judge how and why we're being used, or be jealous of other people’s dharmas, but just to be grateful that we’re getting used. God can see if we’re more like a hammer or a paintbrush or a spoon, and can put us each to proper use so we’re not trying to hammer in nails with spoons or paint pictures with hammers. God has properly chosen each of us for the task that we are best able to fulfill.

Click here to watch a video about the International Yoga Festival.

The International Yoga Festival, located at Parmarth Niketan in Rishikesh, India, unites yogis of every culture, color, and creed together in a one-world yogic family. Come be a part of an expanding global consciousness, March 1-7, 2020, by registering at https://www.internationalyogafestival.org/register/. 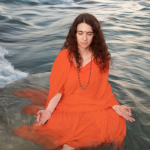