In the Presence of Death; Using ceremony to explore mindfulness in the journey of dying, death, and the years following, in this 9-part series

People new to mourning are often surprised at how brutal the run-up to the first anniversary of the death can be.

The walk towards the first anniversary of a death might start with a slow, dull awareness that the weather feels similar to that of a year ago. The angle of the sun, the holiday just past, the date approaching…it can feel that an ominous, impending shadow is looming. And the grieving person might sink a little deeper into grief again - just when they may have thought the worst of the pain might be easing.

People new to mourning are often surprised at how brutal the run-up to the first anniversary of the death can be. They might not even be aware of why, especially the first time through it, this sense of foreboding grows, like a storm gathering in the distance.

Having gone through it the first time, they may learn to prepare in the coming years, because for many, this challenging gate they step through repeats. It may ease through the years. And it may not.

But many veterans of difficult death anniversaries will say that, surprisingly, the day itself, the actual day, though difficult, isn’t as tough as they thought it would be. It may even feel like a relief: the beginning of the next beginning.

So firstly, know that the lead up to the day itself may be tougher than the actual day.

The anniversary is coming. How can you support yourself as the calendar moves forward?

Start with acknowledging that this is a new side of grief you haven’t experienced yet, in this particular death. Take extra care of yourself: soften around your expectations, drink more water, and prepare for the day to come with some form of ceremony.

Simply make a space to be what it is.

Create an altar, or if you already have one, refresh it to reflect the upcoming event. Remove what is completed, and add what’s coming. It’s a way to say, energetically, that time is moving forward, and you are headed into a big day.

Tell the people around you that you plan to do something on the day itself. And remind them, if need be, that hearing the name of your dead one is more reassuring than not hearing it, and that you think of him or her all the time. As with any beloved, our heart leaps to hear their name, doesn’t it?

As for the first year anniversary of the day of death, do something. Share the event with a few or many people. Whether physical or virtual, some form of ceremony, small or large, can help.

This is another very good time to consider working with a trained celebrant, as they are fantastic at helping put into context the shifting of time and remembrance.

A family of a baby who died at five months holds a virtual event on his death anniversary. For five years now, at the time of his death, they log on to their computers from Thailand, Colorado, Texas, and the Pacific Northwest for a video call. They each have a candle lit, and they take time to reconnect. The Mother leads the way with a poem, an Auntie sings a sweet song, and they share memories of his life. They share their sorrow and love, they witness one another’s tears and smiles, and they reconnect. Here is the story of Burton’s life and death, told at the first anniversary.

Even if you ask your circle of family and friends to each light a candle to remember together from wherever they are, it’s a reconnection that helps support everyone on that especially tender day.

We trust that beyond absence there is a presence.

That beyond the pain there can be healing.

That beyond the brokenness there can be wholeness.

That beyond the anger there may be peace.

That beyond the hurting there may be forgiveness.

That beyond the silence there may be words.

That beyond the word there may be understanding.

That through understanding there is love.

Find readings, poetry, and prayers for the first anniversary on the InspiredFuneral.com, a resource co-edited by Funeral Director Amy Cunningham and Funeral Celebrant Kateyanne Unullisi. 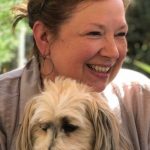 Kateyanne Unullisi is a Pacific Northwest-based funeral celebrant, home funeral guide, writer and death educator. As founder of The Emerge Foundation, Kateyanne works to educate and empower people to have...