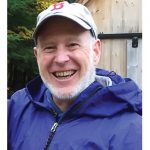 Stephen Blackmer is a conservationist and forest ecologist who took time out for “Rewiring My Brain” (40) and became an Episcopal priest. He is the founder of Church of the Woods, a church rooted in the faith and...