Why today’s most radical practice may be gratitude

Grace itself has several meanings. First, in Christian theology, it is a gift of God, a divine favor. For instance, in the prayer “Hail Mary, full of grace,” Mary is a channel of God’s grace, which flows through her and through her womb:

Hail Mary, full of grace, the Lord is with thee. Blessed art thou among women, and blessed is the fruit of thy womb, Jesus . . .

Second, grace also refers to actions that are pleasing, as in graceful movements or gracious manners. Likewise, it means attractiveness or charm, as in elegant proportions. In Greek mythology, the sister goddesses the Graces were bestowers of beauty and were of exquisite beauty themselves.

Third, grace also means thanks or gratitude, as in saying grace before meals. There are similar words for thanks in other languages: in French, grace à, “thanks to.” The word for “thank you” in Spanish is gracias, and in Italian, grazie.

What unifies these meanings is a sense of free flow in both directions, and from this flow comes graceful movement or beauty. The giver and the giver of thanks are connected; they are in a mutual relationship, as in a bond of loyalty, love, and trust. This is also a theological description of the relationship between God and those who love, trust, and give thanks to him. Likewise, it describes the widespread pattern of human interaction through the reciprocal giving of gifts and services. This mutuality of giving underlies relationships in families and other social groups.

These mutual relationships still exist, and they long preceded organized trade and money-based economies—the process of buying and selling quantified and systematized networks of reciprocal giving. But whereas buying and selling follow quantified rules, giving gifts, gratitude, and something in return are voluntary. They are more free and personal, less automatic and unconscious. Spirit (which I think of as the flow of conscious life) flows through us when we give, and when we give thanks. In my view, this flow is a fundamental aspect of all human societies, and also of human relationships with ancestors, saints, spirits, angels, gods, goddesses, and ultimate reality, which Jews, Christians, and Muslims call God.

The best-selling author and neurologist Oliver Sacks was an atheist who was put off God as a young man when his Jewish family disapproved of his being gay. His last book, published posthumously in 2015, is titled Gratitude and was written when he knew he was dying of cancer. He summed up his feelings as follows:

I cannot pretend that I am without fear. But my predominant feeling is one of gratitude. I have loved and been loved. I have been given much and I have given something in return. Above all, I have been a sentient being on this beautiful planet, and that in itself has been an enormous privilege and adventure.

Being grateful makes us part of this mutual, life-enhancing flow. Being ungrateful separates us from it. When we are part of this flow, we generally feel happier than when we are not part of it, whether we call ourselves atheists or not.

The practice of gratitude connects us to the graceful flow of giving and returning thanks in the human realm, and also to the flow of life in nonhuman nature: in plants and animals, ecosystems, the Earth, the solar system, our galaxy, and the entire cosmos. And if we are open to it, gratitude can connect us directly to the conscious source of all being, the source of all consciousness, form, and energy, which Jews, Christians, and Muslims call God and which Hindus call sat-chit-ananda: being-consciousness-bliss.

In my own home, we hold hands around the table before we eat. Sometimes we sing a grace, sometimes someone says a grace, and sometimes we spend a short period in silence together.

To Stay in the Flow

Try to make this a regular practice—for example, every day before you go to bed. Or once a week: on Friday if you are Muslim, on Saturday if you are Jewish, and on Sunday if you are Christian by ancestry. Other traditions have their own special days. If it helps you to write things down and make a list, then do so. You can give thanks for your own life and health; for your family, your teachers, and other people who have helped you; for your language, culture, economy, education, and society; for plants and animals; to Mother Nature in her many forms; to the entire universe; and to the source of all being. This practice connects you to that which is given to you. The greater your gratitude, the greater the sense of flow and the greater your desire to give.

In my own home, we hold hands around the table before we eat. Sometimes we sing a grace, sometimes someone says a grace, and sometimes we spend a short period in silence together. If I am on my own, I give thanks silently. I suggest making this a practice in your own home. If some of the members of your family or your friends are not comfortable with a grace, then hold hands silently. Or provide a space where anyone can express their thankfulness in their own way, through speaking or singing.

What Breaks the Flow

The opposite of gratitude is a sense of entitlement. Our everyday life in a money-based economy heightens ingratitude because there is no need to feel grateful for a service we pay for. In the automatic checkout system at the nearby supermarket, when I buy food, there is no need to say, “Thank you.” The cash-taking interface is a machine, and the store is part of a corporation whose primary duty is to make profits for its shareholders, who expect regular dividends.

Depersonalization chokes off gratitude, and consumers soon develop a sense of entitlement; they have a legally enforceable right to expect products or services they have paid for and to complain when they do not receive what they expect. And they usually feel no gratitude for the land that produces their food, or to the farmers who grow it, or to the people who transport and prepare it, because they are so depersonalized and remote. 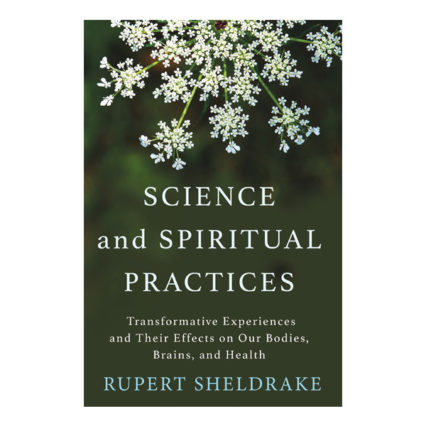 Adapted from the new book Science and Spiritual Practices: Transformative Experiences and Their Effects on Our Bodies, Brains, and Health, by Rupert Sheldrake. Published by Counterpoint Press.